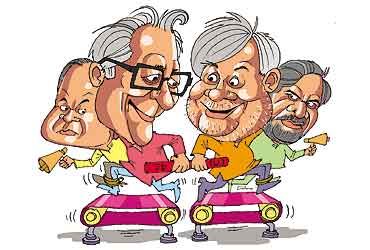 outlookindia.com
-0001-11-30T00:00:00+0553
Don't Dis-pair
The JD(U) leaders have branched out in two different pairs. Nitish Kumar is often seen hitting the campaign trail with Sharad Yadav. But the more durable jodi is that of George Fernandes and Digvijay Singh. Recently, the duo sat at the rear of a Delhi-Patna flight while Sharad Yadav was comfortably ensconced in the executive class. What's more, right through the campaign George and Digvijay will be living at the residence of the latter's brother. The large house in Patna's Pataliputra colony is said to be comfortable enough for the twosome. George and Digvijay also head out for the chopper campaigns together.

Carry the Cross
Laloo Prasad Yadav recently paraded several politicians who had joined the RJD from other political parties. Among them was a former BJP MLA. When it was his turn to take the mike, Laloo asked the newcomer to explain his switchover. "Kyon BJP join kiya tha? (why did you join the BJP)," Laloo thundered. The poor man explained he had made a big mistake and was happy to be saved by the RJD. Laloo's retort: "Hold your ears and promise never to repeat the mistake of joining the BJP." The netaji had no option but to hold his ears and smile sheepishly. 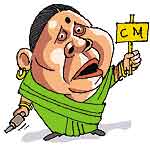 No Puppet Show
If you thought Rabri Devi is a mere rubber stamp for Laloo, the lady disagrees. She is addressing rallies on her own which draw a large number of women. "I have come to you as a daughter. Place your votes in the pallu of my sari." What's more, she adds, "People say I am a kathputli (puppet). Do you think Lalooji is doing all the work? Does he sign all the papers?" Is this a case of a woman being the real strength of a man or vice versa? Either way Laloo-Rabri continue to make a colourful pair. One that is currently air-bound in different choppers. 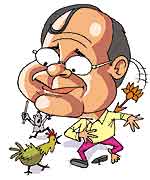 Ruing the Roost
Abhay Kumar Chaudhary was walking peacefully down a Patna road holding a live rooster. As he passed the BJP's office, a melee broke out with workers angrily abusing and trying to physically push around the political bosses after the release of the party's first list of candidates. Arun Jaitley and other BJP leaders were sitting indoors. In the chaos, the chicken flew out of Chaudhary's hands and he claims, ran into Jaitley's room. Now Chaudhary has filed a case in the civil court accusing Jaitley and Co of disturbing the peace on a public road and stealing his chicken. Clearly, Jaitley will have to use all his legal skill to fight the good Chaudhary.

'Dalit Kumar'
Ram Vilas Paswan is ensconced in the largest suite of Patna's Maurya hotel. The rest of the third floor is largely occupied by his supporters. The hotel may be a comfortable refuge for Paswan after the rigours of campaigning, but his presence is a nuisance for the hotel staff and other guests. The lobby is packed with his supporters and hangers-on waiting for an audience. So much so that legitimate guests have trouble reaching the lifts. Paswan's style is distinctly different to Laloo's who revels in projecting the image of a common man. That is why Laloo snidely refers to Paswan as 'Dalit Kumar'.