One could forgive Burton for his celebration of the lost-world of the storyteller. But his nostalgia is sickly-sweet 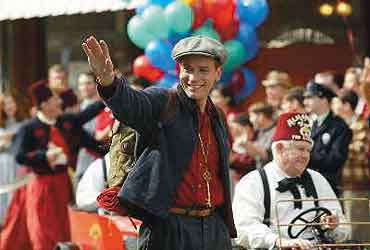 Tim Burton, R.I.P.! Alas, such epitaphic exclamations can no longer be uttered in good faith. Not even after this Big Fish of syrupy Americana swallowed a master of Hollywood Gothic, making a comfortable denizen of this-worldly Yankeeism out of him. And what could his neurotic fandom from the netherworld (People Like Us) do in such circumstances, but twiddle thumbs despairingly.

Never mind if Burton is no Edgar Allan Poe, Albrecht Durer and Ray Bradbury, rolled into one. But the sight of him—this sculptor of darkly humorous dystopias (even the relatively insipid Planet of the Apes)—wallowing in gooey MacHope one fine sunny American day can only leave his adepts with severe withdrawal symptoms and a swinish grimace.

Which detox centre did Burton spend time in before he emerged to fry Big Fish? They surely sent him back infected with that fatal virus of optimism. And so, a conjurer of comic darkness—the Joker (Batman), the Penguin Man and Cat Woman (Batman Returns), real-estate hustler Art Land (Mars Attacks)—decides to lay himself down on a couch, and find endearing explanations for his surreal thoughts in the inanities of real American life.

Big Fish is about Edward Bloom (Finney) and the outlandish tales he tells about his oversized life as a young man (played by McGregor) and the various encounters he has with a witch in whose eyes you can see your death; a giant fellow traveller; conjoined-twin lounge singers whom he discovers in the Far East during WW-II; a town of ghosts called Specter; a circus owner who becomes an unsociable wolf at night but helps him find his love (Lange); and, of course, the big fish he catches with his wedding ring. Mostly avuncular yarns meant to hold the attention of fidgety, pesky kids.

One could forgive Burton for his celebration of the lost-world of the storyteller. But his nostalgia is sickly-sweet. The movie's most despicably cutish moments are those where Bloom's embarrassed son, Will (Crudup), reckons with the reality of his father's life, as the latter nears his end. If you are a Burton adept, make it a point to see Big Fish. If only to know how an imagination brimming with unruly fantasies and dizzying, dark carnivals surrenders to the soothing world of the quotidian.