An unassuming and hard-working player, Bichel is consistent. To the extent that in his ten overs against England, he did not bowl a single wide or no ball. 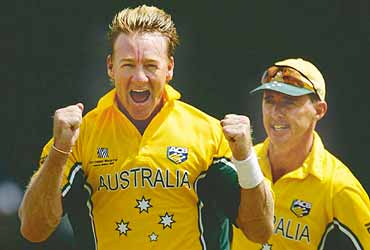 outlookindia.com
-0001-11-30T00:00:00+0553
Almost six years ago, Andy Bichel had to make a heart-breaking and lonely journey homewards from England after suffering a back injury five weeks into the 1996-97 Ashes tour. Ever since he kept waiting to play against England till he finally got that chance, when Nasser Hussain's side went Down Under this season. Bichel played three Tests and an important role with 10 wickets as Australia mauled the English. And last week in his biggest World Cup game ever—he had earlier played against Holland and Namibia—Bichel once again tore into Hussain's side with a performance that will take some effort to match.

No matter what the situation, every Aussie skipper believes that his team has a chance as long as Bevan is at the wicket. That was proved yet again the other day, when 'Bev' carried them home from a hopeless situation against England in their final league match in the World Cup in South Africa. But when Bevan came out and spoke, he had fulsome praise for Bichel, the man at the other end of the wicket. First, Bichel was handed the ball when the English batsmen were scoring at almost seven an over, and then when he came into bat, the asking rate was more than six an over. Both times, Bichel came up trumps. First with a career-best bowling figures and then with his highest score with the bat.

Seven wickets in a one-dayer and an unbeaten 34 at death, and this man is yet to play a full series, Test or limited overs. He is forever filling in leave and injury vacancies in the side. To the extent that despite his obvious talent and ability to deliver in a crunch situation, all that Bichel has played is 11 Test matches since his debut against West Indies at Adelaide in 1996-97 and only 41 games since his one-day debut against the same side at Brisbane in the same season.

Interestingly, apart from playing at home and a couple of one-dayers in New Zealand, the rest of his one-day appearances have all been in the African continent, two matches in Kenya and the rest in South Africa. No wonder, Bichel relishes South African wickets.

He wore international colours at a rather late age, coming into the side only when he was 27 in 1996-97. That was not on account of lack of talent, but merely because he was unlucky to have been around at a time when Australia had an abundance of riches. Glenn McGrath, Brett Lee, Jason Gillespie, Shane Warne and the likes have meant Bichel has spent much time on the sidelines. His big moment came in the World Cup, when England had the marauding Aussies on the mat. Their streak of 11 successive odi wins was on the verge of being snapped by a determined English side led by Nasser Hussain, who was looking to take his team into the Super Six. That's when Bichel produced his very best with both ball and bat.

In the five matches before that he had played just two, both against minnows. Against the Netherlands at Potchefstroom, he had three for 13, and then against Namibia, he got just one over, but took two wickets for no run. He got a look in into the team against England only because Gillespie was out. And how he delivered? Seven wickets for a meagre 20 runs and then an invaluable 34 not out, which helped put on 73 runs for the ninth wicket and carry the team to an amazing win.

An unassuming and hard-working player, Bichel is consistent. To the extent that in his ten overs against England, he did not bowl a single wide or no ball. In three World Cup matches, he has 12 wickets at a total cost of 33 runs for an average of under three runs per wicket!

Bichel learnt his early cricket in Queensland, where he was born. This right-arm paceman has been a picture of consistency for his state side, with excellent line and length and the ability to produce tight and accurate spells. His stock ball is the outswinger which moves away from right-handed batsmen and his biggest asset is that he is a thinking bowler, who varies the pace and length depending on the situation.

He got a place in the national side almost five years after his first-class debut. But the few chances that Bichel has got have not been frittered away. He was part of the Aussie team that crushed the West Indies not once but twice in 1996-97 and then 2000-01. For Queensland he has played a crucial role in two limited-overs title winning teams and did well for Worcestershire in both 2001 and 2002.

Back in 1997, he had got his chance as he was picked up for the Ashes series in England. But he had to return in five weeks with a back injury. His entry into Test cricket had been hardly spectacular with just two wickets in his two matches against the West Indies at home. But things got better when the West Indians came to Australia the next time, three years later in 2000-01. That was when Bichel picked his one and only five-wicket haul in the fourth Test at Melbourne and played his part in the crushing series win by Steve Waugh's side.

Two more Tests against Pakistan at the neutral venue, Sharjah, and they produced two and four wickets in his only Test appearances outside his own country. Then came the home series against England, an opponent he had been waiting for more than five years. In three Tests he took 10 wickets, and that may well have earned him more recognition than ever in his start-stop-start career. What has gone in Bichel's favour of late is his consistency and experience, gained both in Queensland and the two seasons he spent at Worcestershire. As a first change bowler, he is versatile and does not rely on pace alone. In contrast, Lee seeks to smoke out the opposition with sheer pace.

Last season not only heralded his second coming of sorts, but even at home he saw the arrival of his daughter Darcy Rose. And now with this latest World Cup showing, Bichel can rightfully look forward to becoming a more regular feature in the Australian side.