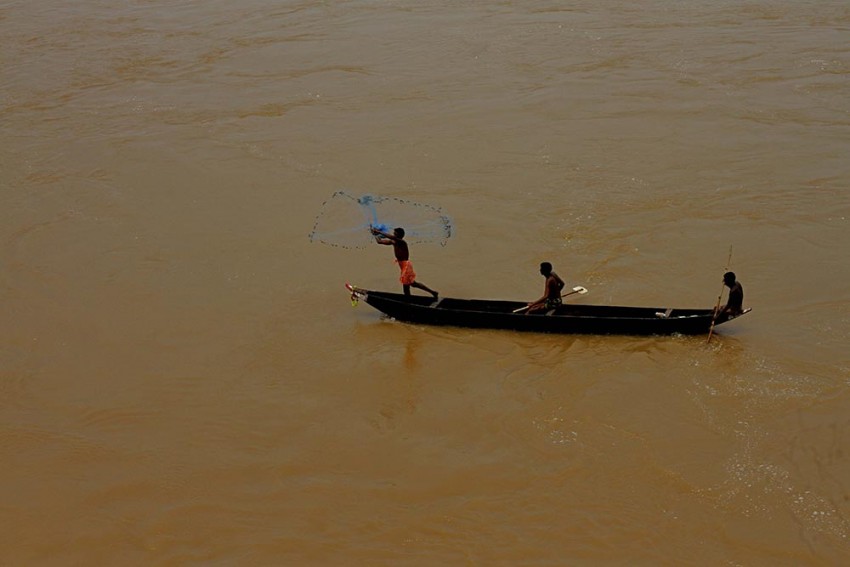 Mighty
The Mahanadi is among the big rivers under the interlink project
Photograph by Getty Images
Bhavna Vij-Aurora February 22, 2018 00:00 IST Bid For A Big Catch 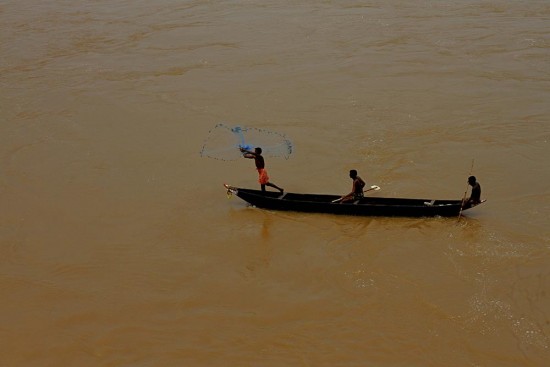 Do you want water or a tribunal? This was a question minister for water resources Nitin Gadkari posed to MPs of the Biju Janata Dal (BJD) in the Lok Sabha last month. The parliamentarians from Orissa were being adamant in their demand for a tribunal to dec­ide the Mahanadi water dispute bet­ween their state and neighbouring Chhattisgarh.

There was no question of a climb-down by the BJD, which is preparing for a direct face-off with the BJP in the in state ass­embly elections next year. Gadkari’s contention fell on deaf years—after all, a similar issue that was mediated by tribunals remain unresolved for three decades. Down south, the Cauvery dispute bet­ween Tamil Nadu and Karnataka lingered for 122 years before the Supreme Court came out with a verdict this February 16—despite a tribunal having been set up in 1990.

The 858-km-long Mahanadi, flowing seamlessly through the two politically antithetical states of east-central India, will finally get a tribunal. On February 20, the Union Cabinet gave its approval following the apex court’s directions. Poli­tics seems to have firmly taken precedence over any genuine concern about equitable utilisation of water. 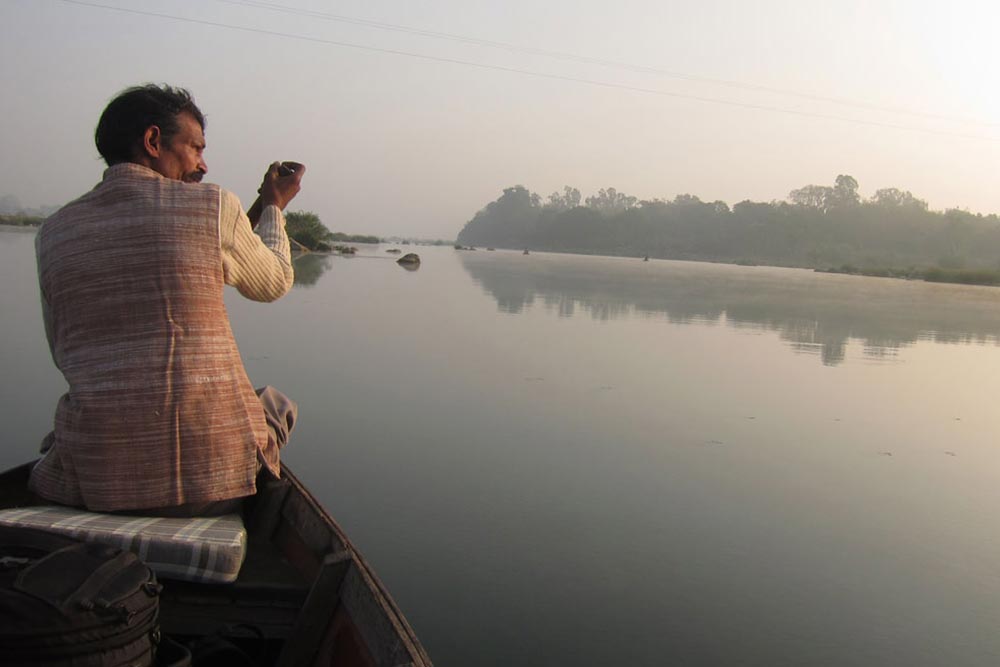 With farmers’ issues likely to be at the centre of all forthcoming elections, inc­luding the 2019 Lok Sabha polls, water wars are not going to cease any time soon. Gadkari has repeatedly said that the country requires proper water management for the government to succeed in its plan to double the income of farmers by 2022. Ever since he took charge of the ministry from Uma Bharti in September last year, Gadkari has put the ambitious Interlinking of Rivers (ILR) project on the fast track. “This project,” says a senior official in the ministry of water resources, “is the only long-term solution to end the cycle of droughts and floods in different parts of the country.”

A blueprint has been made to undertake 30 river-interlinking projects at a total cost of Rs 5.5 lakh-crore. The mammoth plan entails linking of 60 rivers including the big ones like the Ganga, Godavari and the Mahanadi. The government hopes that the ILR will cut farmers’ depende­nce on monsoons. By diverting water from the plenteous rivers to scant waterways by building dams and networks of canals and reservoirs, it can irrigate millions of hectares of cultivable land.

The ILR projects that have been identified include 14 under the Himalayan component and 16 under the Peninsular one. “These link proposals have been formulated to divert the surplus waters available in a river basin after meeting its various needs to the water-deficit river basins and other needy areas,” the official expl­ains. “The projects will provide enormous benefits to the entire country as regards irrigation, drinking water supply, generation of hydro-power and mitigating floods and droughts.” 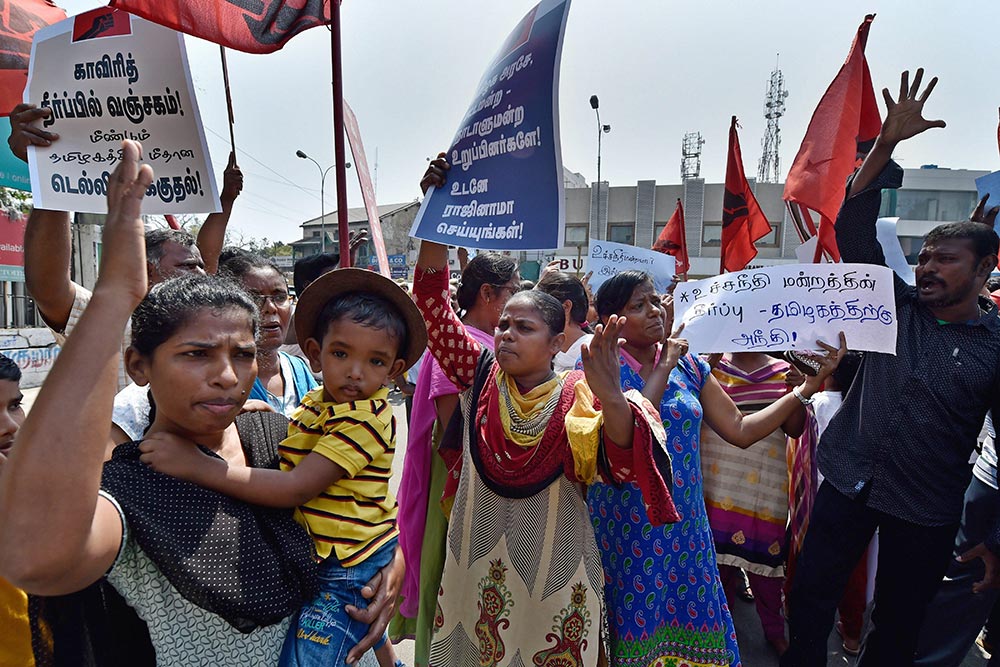 Protests against SC’s verdict on the Cauvery river water dispute

That is the reason the ministry is pushing to give ILR the status of a “national project”. This will expedite its implementation through quick and timely availability of funds and better monitoring. A Special Committee for Interlinking of Rivers discussed the matter at a January 17 meeting. Granting any project a “nati­onal” status ensures funding on the 90:10 pattern: the Centre will contribute 90 per cent towards its funding, and the states concerned will put in 10 per cent. The existing ILR project funding pattern, as decided by the Niti Ayog, is 60:40.

“It is difficult for states to implement such a huge project under the 60:40 pattern,” says an official of the Nat­ional Water Development Agency (NWDA) that has been entrusted with implementation of the ILR. “They have to anyway take care of other problems like land acquisition and resettlement and rehabilitation of the affected. Most of the projects that are focused on irrigation create unr­est at the beginning.”

The problem, the NWDA official says, is that most of the displaced don’t initially benefit from the project. “The advantage is for those downstream. The states have a lot on their plate. Moreover, since each project involves two or more states, it makes sense to accord it a national status. It makes coordination easier.”

The interlinking of the Ken and Betwa rivers in Madhya Pradesh and Uttar Pradesh respectively has already been granted the national project status and put on the fast track. “It was necessary to expedite it, keeping in view the immense benefits of the project to Bundelkhand,” says the official. The project envisages fulfilling the region’s water needs, making almost six lakh hectares of land irrigable. Three other ILR projects have been put on a fast track: the Par-Tapi-Narmada (involving Maharashtra and Gujarat), Damanganga-Pinjal and the Mahanadi-Godavari.

The NWDA does not foresee much trouble in kicking off the Ken-Betwa and Par-Tapi-Narmada projects. All the pertinent states are BJP-ruled, and have been asked to fall in line. “Gadkari has met all the chief ministers and asked them to cooperate,” adds the official.

"If the income of our farmers has to double by 2022, then the country needs a strong water management system."
Nitin Gadkari, Union minister for water resources

The Ken-Betwa link had led to a long stand-off between the two states, with Madhya Pradesh CM Shivraj Singh Chouhan conveying to the Centre that the project is more beneficial to UP. “Yes, he has some major issues,” says a ministry official involved in the project. “The initial plan was to implement the project in two phases. It has been decided to merge them, so work will happen simultaneously.” This was done after Gadkari had a recent meeting with Chouhan and promised to resolve issues. “The CM has had to show the farmers in his state that he fought for a good deal from the Centre.”

Chouhan also faces the challenge of relocating at least 2,000 families from a dozen villages near the Panna tiger rese­rve. A dam can be built only after clearing 6.5 per cent of forest reserve. In fact, env­ironment activist Himanshu Thakkar has appealed to the National Green Tri­bunal against the ministry’s clearance. But sources say the project can go ahead until the NGT, if at all, orders a stay.

Officials of the ministry claim that the memorandum of understanding for the Ken-Betwa and Par-Tapi-Narmada projects will be signed by this April. The Par-Tapi-Narmada link envisages irrigation benefits to drought-prone Saurashtra and Kutch in Gujarat. The Damanganga-Pinjal link proposes to augment domestic water supply to Mumbai. The Mahanadi-Godavari includes nine smaller links, which officials admit has a challenge: to get on board non-BJP-ruled states like Andhra Pradesh, Tamil Nadu, Telangana and Karnataka.

The ministry has constituted a ‘Group on Financial Aspects under the Task Force for Interlinking of Rivers’, headed by former secretary Prodipto Ghosh. It has been asked to suggest a funding pattern for the implementation of the project. The group held three meetings. Based on its suggestions, the states have been urged to come forward with definite funding proposals that can probably be taken up with foreign agencies. The creation of a central fund for the project is also under consideration.

Forward, With A Sentimental Throwback