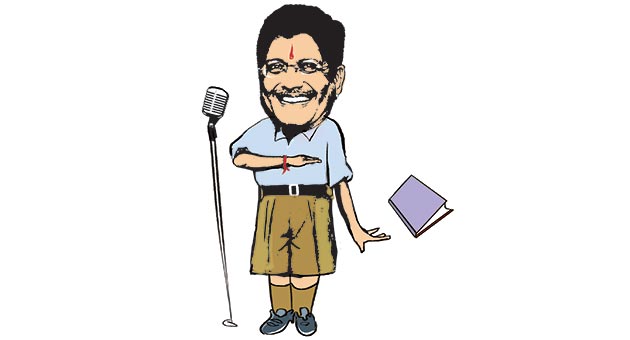 In today's politically charged atmosphere, there is no saying how any event can turn political. The high-powered launch of economist Rajiv Kumar’s book, Modi and His Challen­ges, had journalists T.N. Ninan and Mark Tully and minister Piyush Goyal on the dais. Ninan and Tully tal­ked about the “inv­idious saf­fronisation”. This led Goyal to go on a long-winded, old defence of the RSS. Modi's challenges were forgotten.  Goyal­ took an hour trying to prove that critics were wrong to “art­iculate the RSS as a hardcore nationalistic ideology”, when it strove to “put in discipline and love for the nation” among its cadre, which includes him. Many left half-way through his monologue.glist of 13, the debate is once again hot if it was a good idea to take it out of the Commo¬n¬wealth. Last year Peter Carey, twice winner of the Booker, had controversially said that Americans are not part of the Commonwealth culture as Austr¬alians, South Africans or Indians were. Now many British writers feel he was right.

Delhiites of a certain generation will have fond memories of the little bookshop in Connaught Place, Bookworm, and spending hours browsing, as jazz played in the background, or using it as a rendezvous to go to a movie and Nirula’s later. There would be the amiable, encyclopaedic owner, Anil Arora, at the coun­ter, ready to offer advice about an arrival or about procuring a rare book. First, Bookworm shut down. This week Anil Arora passed away. We may now be clicking on Amazon and Flipkart, but the fragrance of Bookworm will linger on.

Hillary Clinton is ahead of Donald Trump in opinion polls, but will she survive a new book on her husband Bill Clinton’s philandering ways as president, Inside the Clinton White House by oral historian Russel Riley? It has even more dirt on Clinton as Arkansas senator, and talks of how Hillary knowingly kept up with his dalliances. Almost all of Clinton’s women have said people can’t trust Hillary.

Repo And Its Masters