The launch of Rana Ayyub's controversial book on Gujarat riots, what Lewis Carroll's fans are looking out for and colouring books for adults. 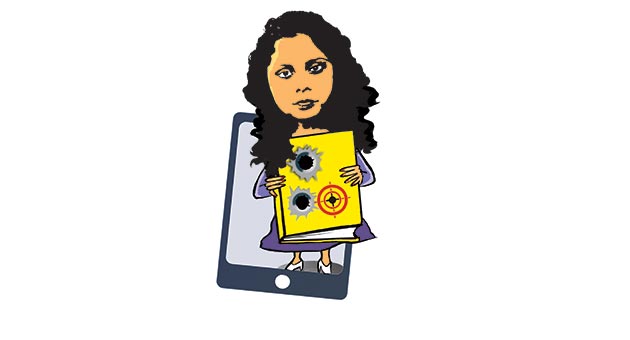 Rana Ayyub’s launch of her controversial book, Gujarat Files: Anatomy of a Cover Up, was quite a riot in Delhi’s Habitat Centre. The hall was bursting with journalists, activists, academics and what one thought was the city’s vanishing tribe—the left-liberals. This is great going, considering Ayyub has self-published the book without the marketing and PR might of a big firm. It was the top selling e-book on Amazon at the time of writing this piece.

Johnny Depp’s new film, Alice Through the Looking Glass, has opened to mixed reviews. But what Lewis Carroll’s fans will be looking out for is the forthcoming auction in New York of the first edition of Alice in Wonderland. Two thousand copies of the book were published in 1865 and Carroll got a few copies from publishers. But the book’s illustrator, John Tenniel, threw a fit, saying his work was badly printed. Carroll asked everyone to return the copies he had sent out, and “the first 2,000 copies be sold as waste paper”. Still, 22 copies of this edition survived. One will be sold this month; bookies have pegged the price to be around $3 million.

Colouring books for adults are all the rage. There is the exquisitely brought out Bagh-e-Bahar: A Mughal Garden, int­erspersed with Khusro, Lao-Tze and Rumi (“No more words...stay quiet like a flower, so the night birds will start singing”) lyrics. Colouring its int­ricate patterns can be challenging and satisfying. Then there is the Jaya and Sita Colouring Books based on Devdutt Pattanaik’s retelling of the Mahabharata and the Ramayana. Imagine colouring the ten heads of Ravana!