The first Jamaican to win the Booker prize and Rushdie's unafraid form.

The gloom that descended on the Caribbean when West Indies failed to qualify for the ICC Champions Trophy in England in 2017 must have lifted a little by the dazzling achievement of Marlon James—the first Jamaican to win the Booker prize. His searing, tumultuous, nearly 700-page The Brief of History of Seven Killings, a fictional account of the attemp­ted murder of Bob Mar­ley in 1976, was described by the judges as “very exciting, very violent, full of swearing”. They added, “It was a book we didn’t actually have any difficulty deciding on—it was a unanimous decision, a little bit to our surprise”. It was the favourite to win, ahead of Indian-origin British author Sunjeev Sahota’s The Year of the Runaways and Ann Tyler’s A Spool of Blue Thread. James, 44, dedicated the award to his late father with whom he used to have Shakespeare duels in his childhood, saying, “Who can have the longest soliloquy...just imagine a father and son in a Jamaican rum bar”. Cheers to that. 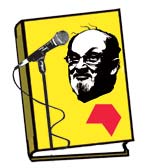 “Literature is the unafraid form,” said Salman Rushdie as he went up to make the keynote speech at the Frankfurt Book Fair—the organisers refused to give in to Iran’s threat that it will withdraw from the fair if Rushdie was invited. “Literature may be weak because it has no real power in the world, but in a way it is the grandest narrative of all, in that it puts ourselves into question with fiction,” said Rushdie, against whom Iran’s Aya­tollah Kho­meini had issued a fatwa. A few days ago, Rushdie had tweeted in support of Nayantara Sahgal and others who had returned their Sahitya Aka­demi awards in protest against the att­ack on the core values of our country.

Some Lives Are Thrillers