Entries to the £30,000 Sunday Times Short Story Award are open till September 26. 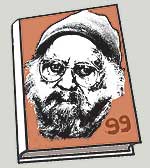 Fun of a Gun

This will perhaps be Khushwant Singh’s last book. Simply called 99 (Aleph, Rs 699), as it would be his 99th birthday this 15th August, it has his best columns, essays, stories, poetry and humour writing. In a poignant event at a Delhi hotel, his ghost seemed to hover over the packed hall as Sunit Tandon and Mahmood Farooqui read out passages. At the end of a short film on him, his famous My Own Epitaph was the last frame, bringing a smile on all fans and friends. ‘Here lies one who spared neither man nor God/Waste not tears on him, he was a sod/Writing nasty things he regarded as great fun/Thank the Lord he is dead, this son of a gun.’

Chew on a CB

The next big book, of course, is Chetan Bhagat’s Half Girlfriend. Apparently, his last book Revolution 2020 sold a million copies in the first 100 days. Now, Rupa is leaving no stone unturned and taken it as a challenge to double that figure with the new one in the same period. So be prepared to see a lot of CB on promos, on social media, on internet portals, TV and print. They are hoping his magic will work again.

If after reading a Ray Bradbury, Alice Munro or Sundara Ramaswamy you always thought you could do something like them, the world’s richest short story prize is up for grabs. Entries to the £30,000 Sunday Times Short Story Award are open till September 26. Some of the past winners of this prestigious award are Junot Diaz, Kevin Barry and Anthony Doerr. More details in the Sunday Times website.

The ‘I’ Of The Tiger