Aleph pulls off a coup with Vikram Seth, thus bringing him together with old friend David Davidar 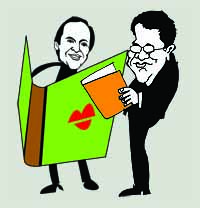 Girl On The Move

The young publishing house Aleph, under publishing veterans David Davidar and Ravi Singh (and under the Rupa umbrella), has staged a coup of sorts. It has got our most talen­ted poet, writer, calligrapher, translator and artist Vikram Seth in its fold. Seth was having problems with Penguin UK, which allegedly cancelled his contract as he couldn’t deliver A Suitable Girl, the sequel to A Suitable Boy, on time. There were reports Penguin UK wanted the hefty advance they had given Seth back. Well, Seth and his old friend Davidar (who had published, against conventional wisdom, the 1,349-page A Suitable Boy as head of Penguin in 1993) are back together and the much awa­i­ted Girl will be published by Aleph in 2016. But before that there will a reissue of Boy next year with a new introduction. Vik­ram Seth was also in the news for his views on the recent Supreme Court verdict upholding the criminality of gay sex. This is what he said at NDTV’s 25 Grea­test Indians function: “Intolerance is vio­lence. And accepted intolerance is violence with the acquiescence of society.”

Donna Tartt is back in terrific form with her new book, The Goldfinch. After her cult hit The Secret History over a decade ago, which she wrote while still in college, she sort of vanished from the scene. Her second book, The Little Friend, was a bit of a clunker. But just when her fans were wondering if she was a one-book wonder, she is back with a bang with Goldfinch, currently in almost all bestseller lists in the US. The writing is luminous, the plot deep and complex, and the characters mercurial. Go for it.