When it's Vikram Seth, you should be prepared to be wowed... 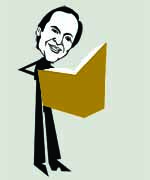 Giacomo Leopardi, the 19th century Italian poet and philosopher, is Vikram Seth’s favourite poet. So when there was a talk on him by Professor Franco d’lntino, who has edited the new English translation of Leopardi’s 4,526-page diary of philosophical thoughts, Seth was in the audience at the Italian Cultural Centre. The organisers would have none of it and promptly placed him on the dais. After an excellent presentation by Prof d’lntino charting Leo­pardi’s life and works, Seth was asked to speak. He read out his translation of Leopardi’s most celebr­ated poem, The Infinite, which he hap­pened to have on an e-mail on his phone. After the reading, he paused for a minute, saying it doesn’t quite sound the same in English. “It’s more sonorous, you know, quite different in the original Italian.” Then he shut his eyes and recited the whole poem, in Italian, to an enthralled audience. Giac­omo Leopardi was a self-taught polymath who even knew Sanskrit. Well, we have our own Vikram Seth.

A Roth To Reckon

Veronica Roth is the latest best-selling sensation whose book series could soon reach the magical proportions of Harry Potter. Her tril­ogy—Divergent, Insurgent and Allegiant—is topping the charts in the US, the last sold over 4.5 lakh copies on day one. The first, Divergent, is already being made into a blockbuster film. But oddly, unlike Harry Potter, the Twilight series or even Fifty Shades of Gray, the series is yet to set India’s bookstores on fire and not many have heard of Roth yet in these parts.