More on Joseph Anton. And the new sensation in what is being described as ‘clit-lit’... 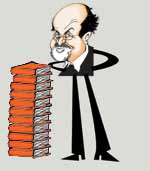 There’s much secrecy surrounding Salman Rushdie’s hotly awaited memoirs, Joseph Anton, that will be hitting the stands worldwide on September 18. All the senior editors and publicists at Random House have got a fatwa from the top not to let out a whiff about the book to anyone outside before the launch date. Even the top honchos at the publishing house will get a dekko at the book just a day before it’s shipped to the stores. Internet bookstores like Amazon and Flipkart are taking pre-orders, but again deliveries will be after this pre-ordained date. Now, will there be mile-long queues and armed guards outside bookstores, like the frenzy around the Harry Potter books? And what’s all the fuss  about Joseph Anton anyway? It’s about the nine years Rushdie spent under the death threat issued by Ayatollah Khomeini after Satanic Verses came out in 1989: Rushdie was asked to assume an alias and he came with this combination—the first names of two of his favourite authors, Joseph Conrad and Anton Chekhov. With the magic waning from his realism in some of Rushdie’s recent outings, an angsty tell-all memoir is perhaps what his fans need a dose of.

This was always going to have a hundred more shades. Even before the handcuffs could be taken off and the breathless panting stopped, here comes Bared to You by Sylvia Day, the new sensation in what is being described as ‘clit-lit’. After the inexplicable publishing phenomenon of the Fifty Shades trilogy, Day’s book promises to be darker and hotter. It’s already climbing the charts fast in the US and UK; will it be as big a hit here too?

What The Finch Ate Today