Can a litfest get as huge as the Jaipur one and still retain quality?

Can a litfest get as huge as the Jaipur one and still retain quality? There was much talk this time about the “atrocious” quality of moderators, who did not seem to have read the books being discussed, and worse, couldn’t even get the writers’ names right. At one session, the moderator kept referring to Mohammed Hanif’s first book, A Case of Exploding Mangoes, which had nothing to do with the discussion on ‘The City as a Dream’. Hanif’s co-panelist, Meenal Baghel, author of Death in Mumbai, was passed off as Meena. 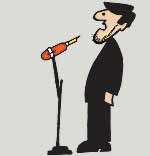 Sometimes it was the speakers who gave the moderator a hard time. Top of the list was British playwright Tom Stoppard, who refused to spend some time before the panel began to go over what he’d be talking about, or even bother to get his or her name right. Mukund Padmanabhan, given the intimidating task of introducing the Grand Old Man, was reduced to being a mere clerk, writing down the questions Stoppard agreed to address. To add to his discomfiture, Stoppard insisted on addressing him as Mukh, making me wish he’d retaliate by addressing him as ‘Toe’.

But ‘Toe’ Stoppard could be charming when he wanted to. I overheard this conversation in the green room for authors, which even boasted of a four-poster. Finding Gillian Wright lying prone on it, Stoppard stopped by, peering sympathetically at her.

Tom: Are you very ill?
Gilly: No, just very tired of listening to so many clever people.
Tom: Not as tiring as being clever the whole day.