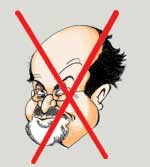 I had breakfast with one of the four writers exiled for reciting from Rushdie’s Satanic Verses. The others had already left the city but he was there till the next day, munching his toast calmly, in solitary splendour. You got the feeling he wasn’t the most popular guy in the room that morning. Writers at the Jaipur litfest don’t say it aloud but they’re a bit peeved at this litfest becoming all about Rushdie vs the Weirdos. The more sophisticated pretend sympathy for Rushdie being discussed not for his books but as an issue; lesser-known writers are enraged at how he has hijacked all the attention. Others wonder if the litfest will survive the current storm. The picturesque and cosy venue at Diggi Palace is the litfest’s greatest charm but this year it became clear that with its limited space and huge crowds, it’s a security nightmare.

One of the rarest and most moving tributes to a writer had nothing to do with Rushdie. Three panelists, including New Yorker’s David Remnick and Philip Gourevich, besides former nyt editor Joseph Lelyveld, saluted Katherine Boo for her forthcoming book on Bombay slumdwellers, hailing it as the best example of journalism as literature since George Orwell. Boo was moved to tears.

Girish Karnad’s Indian peers were less complimentary when they heard him giving excuses about why Indian theatre was in the doldrums. People don’t go to plays anymore, Karnad said in a conversation with David Hare, because of the traffic snarls. To which a Kannada poet retorted, “I wanted to throw a shoe at him.”

Getting The Yang Of It