Musical chairs continue, as does the wait for David Davidar's no-poaching contract with Penguin to end... 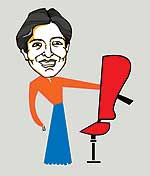 Random House appears to have learnt its lesson. Its outgoing editor-in-chief Chiki Sarkar was not just the face of the publishing house in India, but everything else as well: hunter of new talent, veto-er of books she did not like, chief promoter and active campaigner for her authors and books, with one hand in the design department as well. Which was all wonderful—until she suddenly decided to jump jobs to Penguin publisher. Once burnt, Random House has now split her job into two: Meru Gokhale, formerly commissioning editor with Penguin, takes half the job as head of its literary imprint, Vintage, while Milee Ashwarya, who worked under Chiki, gets promoted to head of its commercial books, Ebury India. Both will report directly to Random’s MD, recalling the days when Penguin had two editorial heads after David Davidar moved to Canada.

With trade leader Penguin sitting on a large pool of talent—not just its list of authors but editorial, marketing and designing teams as well—it’s not surprising that other publishing houses are eager to fish for experienced hands. In the last few weeks, not just its publisher, Ravi Singh, has jumped ship, but its art director and backlist publisher, Bena Sareen, and its senior marketing manager, Rachna Kalra. While Kalra moves to Pan Macmillan, in the throes of an ambitious make-over, Ravi Singh and Bena Sareen are still hovering as consultants at large. But why do we get the feeling that it’s only a matter of another few weeks, when David Davidar’s no-poaching contract with Penguin ends, before they join him at Aleph—the high-profile joint venture publishing imprint that Davidar has started with Rupa?