What's common to Das, Doniger and Dalrymple? No, not just the letter D. OK, here's a hint: heard of a blurb fest? 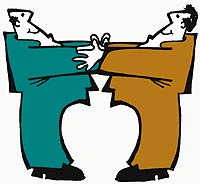 Talk of a blurb fest! Judging by the adulatory blurbs on the backs of Penguin’s recent Big Three—The Difficulty of Being Good by Gurcharan Das, The Hindus: An Alternative History by Wendy Doniger and Nine Lives by William Dalrymple— there’s a mutual admiration club operating here. Das’s book has been blurbed by Doniger, and Das returned the favour by blurbing Doniger’s book. The American Sanskritist has also blurbed Dalrymple’s new book, and in her own The Hindus, Dalrymple is not only acknowledged as the muse, but even the book is dedicated to him.