If William Dalrymple can contest and win the Crossword awards, then why not Patrick French? 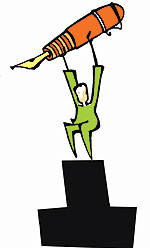 Talk of surprise wins! At the Crossword Book Awards ceremony last Thursday in Mumbai, no one was surprised when Amitav Ghosh’s Sea of Poppies won. Ghosh even walked up to the stage in a triumphal burst of music and accepted the award from Nayantara Sahgal, before it was discovered that there was another winner this year in the fiction category—London critic Neel Mukherjee’s debut novel, Past Continuous. The book sold a modest 1,600 in hardback, and it’s just gone into paperback with an equally modest print run of 3,000. The other winners are: Basharat Peer for Curfewed Nights (Non-fiction), Ira Pande (for translating T’ta Professor), and Pallavi Aiyar (Smoke and Mirrors).

In its eighth year now, the Crossword awards seem to have tied itself up in knots with its own rules: if the prizes are only for Indians, then who exactly is an Indian? If William Dalrymple can contest and win, then why not Patrick French? The latter’s publisher tried to enter, unsuccessfully, French’s biography of Naipaul, The World Is What It Is. Now they are thinking of bending the rules for those with an Indian spouse—in which case both French and Ghosh’s wife, Deborah Baker, will qualify.

Justice On A Roll
With literary awards growing, there seems to be a shortage of judges. Why else would The Hindu’s journalist Mukund Padmanabhan be called upon to judge three literary contests in a row: as judge in the fiction category for Crosswords, followed by Golden Quill best book awards, and then Shakti Bhatt Best First book prize.