Mysteries: How David Godwin got Vikram Seth on his list. And where is Penguin is finding the money for the fat advances despite falling sales? 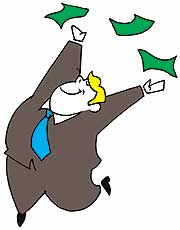 The Agent’s Secret
It may be gloomy times for the trade, but not for British literary agent David Godwin. Surely this must rank as his luckiest year in business—first he sold Sarita Mandanna’s debut novel Tiger Hills to Penguin India for a record advance, and then proceeded to break his own record by selling them Vikram Seth’s proposal for a "jump sequel" to A Suitable Boy. But the real story is not how Godwin managed to sell Seth’s new novel proposal to Penguin UK for a reported £1.7 million, but how he got Seth on his list at all. In Seth’s case, it’s the agent who has to prove himself worthy to be hired. A previous agent, Giles Gordon had to submit to a grilling by Seth on literature before he was hired. Godwin, alas, refuses to divulge what he finally did to convince Seth to cross over.