Recession ensures that only popular Indian books rather than literary ones by lesser-known writers would get the advances... 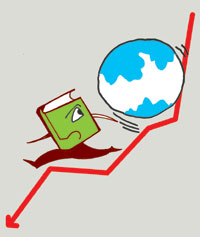 Arrested Flight
The literary agency floated by Osian’s two years ago was put down quickly, almost painlessly, in January, with its lit-agent Renuka Chatterjee crossing over to head Westland’s publishing house. Its demise is being seen as the first of what the worldwide recession holds for India’s book world. In the preceding boomtime, Osian’s managed to strike at least one big deal—Ved Mehta’s collected works sold to Roli for a five-figure sum in dollars. It’s natural that publishers now prefer to do business directly with authors, and except for potential bestsellers, authors can kiss their dreams of high advances goodbye. 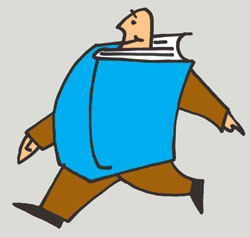 Rocket Launch
Advaita Kala’s Almost Single has just been launched as a mass market seller in the US, selling at supermarkets and bookchains as the season’s hot read. Kala recently found herself her own agent abroad—with astonishing results. Her book went under auction in the US, and was finally sold to Random House’s mass imprint, Bantam. Even post-recession, the book is selling well, with French publisher Hachette just signing her on. Though one chicklit book doesn’t make a boom, it’s clear that in these tough times publishers abroad will look for popular Indian books rather than literary ones by lesser-known writers.

Not In A Copybook
So what’s the secret of Shobhaa De’s unreadable Superstar India selling a record 1,00,000 copies? Rival publishing houses claim it has nothing to do with actual sales, but by being given free by a book club. You know—buy two books and get Shobhaa De’s free.