Are celebrity autobiographies palling, not just in India but at the Frankfurt book fair as well? Nevermind, but guess who's writing the latest in the Remember-Me genre... 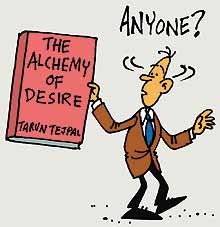 All Ears Elsewhere
And we thought it happened only in India. After the phenomenal success of Tarun Tejpal’s The Alchemy of Desire in its French translation, his Paris publisher Marc Parent of Buchet-Chastel has decided to play a double role as Tejpal’s agent for world rights as well. He was busy telling all at Frankfurt how The Alchemy sold 60,000 copies in hardback and 1,00,000 in paperback. But with everyone discussing the meltdown at UK’s biggest literary agency, pfd—all 85 agents on its staff walked out recently in protest against the appointment of a rank outsider as boss—no one was listening to Tejpal’s French agent/publisher. 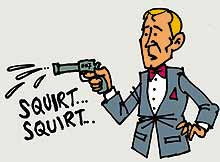 Back To The Cold
Are celebrity autobiographies palling, not just in India but at the Frankfurt book fair as well? The most talked about book at the fair last week was Roger Moore’s autobiography, My Word is My Bond. Moore turned 80 this year and is ready to write the story of his life, or rather, have it ghostwritten by his personal assistant, Gareth Owen. Bidding for the book opened at an ambitious one million pounds, but it predictably ended up unsold.

Tell-Tale Snarl
It’s not always about the money. The most recent entrant to the Remember-Me genre of autobiography is Deve Gowda. His ghost-written memoir, tentatively titled Three Hundred Days As Prime Minister, will be out soon in English and Hindi. Interestingly, Gowda waited until he was pushed into a political corner last fortnight before announcing—or threatening, some would say—that he would soon be publishing his memoir.