Heard of Maren Stoffels? And why does Mohsin Ahmed feel that writers should limit googling to once a week at the most?

Jetlagged publishers, having done the rounds of Frankfurt, Paris and London book fairs, are now preparing to play hosts to what will possibly be the biggest turnout of foreign publishers and authors at the World Book Fair early next year. Rajkamal Prakashan, one of the largest Hindi publishers, has invited a teenaged Dutch celebrity writer, Maren Stoffels. Few may have heard of this 19-year-old in English. But Rajkamal, reeling perhaps from the loss of several writers from its stable migrating to Penguin's Hindi division, discovered her recently and plans to translate her bestsellers directly from Dutch into Hindi. 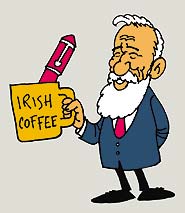 Indians may consider W.B. Yeats, Bernard Shaw, Oscar Wilde and James Joyce as English writers, but ask the Irish. The World Book Fair will be the right time, they figure, to project Irish writers and their contribution to world literature, including Indian...