The rush for Rushdie not lessened by his speaking fee of $45,000 while the Alchemy of Desire endears itself to the French... 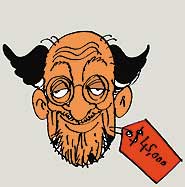 With litfest fever spreading across India, Salman Rushdie seems to be having a tough time fending off the invitations. Last heard, he was approached by IIT Kanpur. They wanted him to lead their maiden litfest last fortnight. His agent sent them Rushdie's terms: "In addition to first class travel and expenses, Mr Rushdie's honorarium for international events is $45,000. If you have any questions please feel free to call or e-mail me at your convenience." There weren't any questions, of course. But the writer's speaking fee must have impressed the IITians. A record number of them signed up for the creative writing course that was part of the litfest. 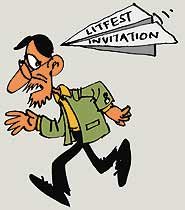 Other writers seem to be as fatigued by litfests as Rushdie. Over 60 writers—A, B and even C list ones—received invitations but none could make it. Is it the prospect of Kanpur or the thought of facing a roomful of the nation's brightest that scared them off? The Woodstock School which is organising a Mussoorie international litfest next fortnight, hasn't had much luck either. Except for the resident Mussoorie writers like Ruskin Bond, Nayantara Sahgal, Bill Aitken and Steve Alter, the only writer of note they've attracted is Sudhir Kakar.

Alchemy Of Boredom
Tarun Tejpal's Alchemy of Desire has endeared itself to French readers, but not the author. At the Paris book fair, French journalists got a taste of our writerly manners, when he yawned and SMSed his way through a news conference.