Why did three writers lock themselves up in glass cages? For a novel experience. OUP crosses the Rs 100-crore mark. And how oil in the hair helps... 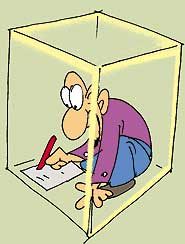 It's something all writers yearn to do, one way or another: lock themselves up. But Ranbir Sidhu, 38, former archaeologist and Pushcart Prize winner for a short story, is one of the three writers who've locked themselves up in glass cages for a novel experience. They're part of Flux Factory's art installation in New York where they've been put in specially-designed glass modules. At the end of one month, on June 4, they're expected to emerge with the first draft of their novels. Visitors are allowed at fixed hours and on Saturdays, when the self-imprisoned novelists read from their works-in-progress. There's a 90-minute bathroom/snack break and work stops at dinner time. The living installation is attracting hordes of gapers. As for the writers, picked out of 200 applicants, it's just what the muse ordered. Says Sidhu in his blog: "This is a serious attempt to write a novel." Nor does being on occasional view perturb him: "We just pretend—smoke, stare, snore.... The rest of the time we have been known to put fingertip to keyboard."

They may not have glittering book launches but the ancient and very scholarly Oxford University Press appears to be miles ahead of its competitors in the industry. On March 31 this year, their annual turnover crossed the Rs 100-crore mark. The more popular publishers are still showing a turnover in the range of Rs 25-30 crore, despite their higher visibility. Interestingly, the only other publisher who comes anywhere close is also an academic publisher, Tata McGraw-Hill. 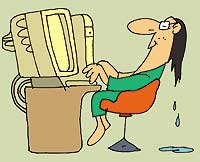 One writer, finding the daily distraction of five-star book launches was slowing up her progress, came up with an ingenious re-invention of a writer's cage. "Every evening, just when it was time for me to step out for yet another party, I oiled my hair." That kept her glued to her room, if not her seat before the computer. Within months, the manuscript was delivered to her publisher.

Proof Of A Pudding