Who is Nandita Puri and why did her debut collection of short stories get a reading by Amitabh and Jaya Bachchan, a cover by M.F. Husain and blurbs by Shobhaa De and Khushwant Singh... 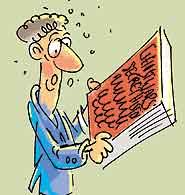 We may as well call him Maximum Mr Mehta now. After Suketu became the first ever South Asian finalist, not winner, in the Pulitzer general category. Steve Coll, former managing editor of The Washington Post, and one-time New Delhi bureau chief, bagged the General Non-Fiction Pulitzer for his book Ghost Wars: The Secret History of the CIA, Afghanistan, and Bin Laden, from the Soviet Invasion to September 10, 2001. Our unconsidered vote? Definitely, Mr Mehta's pithily titled tome—Maximum City: Bombay Lost and Found. Simply since it follows the unspoken code that book titles like Coll's shouldn't drag out all the air from your lungs—when read aloud.

London's publishers may produce 1,00,000 new books a year, but when it comes to book launches they're learning a thing or two from Indians. Only three months ago, when Random House's international director Simon Littlewood and senior editor Jane Lawson flew down here to launch Vikas Swarup's Q & A, they were overwhelmed by the scale of the event: ministers, diplomats, socialites, TV cameras—the works. But with more Indian authors than ever on the London literary circuit this season, book launches there seem to be borrowing the Indian style. So for the launch of the UK edition of Pavan Varma's not-so-new Being Indian, Random House had the event inside the House of Commons premises, with two lords, Bhikhu Parekh and Meghnad Desai, on the discussion panel, along with Judith Brown. 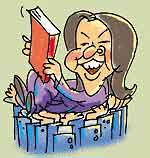 Auhors with manuscripts of short stories are usually told to go home and produce a novel before they can dream of a book launch. Not this one. Nandita Puri's debut collection, Nine on Nine, got the full treatment: launch at the Grand Sheraton's ballroom, a reading by Amitabh and Jaya Bachchan, a cover by M.F. Husain and blurbs by Shobhaa De and Khushwant Singh. Why? She's actor Om Puri's wife.