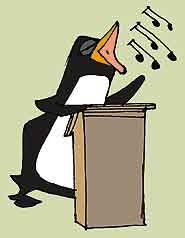 Next to book launches, the best way for publishers to tickle their star writers' vanity seems to be by publishing their otherwise unsaleable poetry. Having started out with A.B. Vajpayee's poems, Penguin seems to be determined to continue the tradition. In April, they come out with President A.P.J. Kalam's old bunch of "poems" with a new name, The Life Tree. Vajpayee thankfully has only provided a foreword. More is in store—in May, Penguin will be out with the Soka Gakkai International's chief Daisaku Ikeda's poems, Fighting For Peace. Also, Anurag Mathur's first—and let's hope last—poetry collection, A Life Lived Later. Wonder which is worst for Amit Chaudhuri—to bring out a new collection, St Cyril Road and Other Poems, whose future, as he himself readily admits, is bleak; or to rub shoulders (in the Penguin catalogue) with the other poets in Penguin's stable. 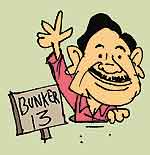 Indian readers may have forgotten Aniruddha Bahal's Bunker 13 and Manju Kapur's A Married Woman, but British readers haven't. A recent booklist compiled by seven UK publishers from a database of the most-borrowed books from public libraries all over Britain includes the two in a list of top 21 "surprise hits" by what they euphemistically call "less well-known writers". To find out what less well-known means, take a look at some of those on the list: The Hostage (Duncan Falconer), Don't Even Think About It (Lauren Henderson), Lazy Ways To Make A Living (Abigail Bosanko), Story of My Father (Sue Miller), If Nobody Speaks of Remarkable Things (Jon McGregor), Aberystwyth (Malcolm Pryce), The Future Homemakers of America (Laurie Graham), A Very Unusual Governess (Sylvia Andrew)....

I want to thank my mother and father, my sister, my childhood friends, my mentor, Vidia, my agent, my editor, not to mention my wife and daughters. Let's see, who else have I forgotten..." Sounds like an Oscar speech? No, that's debut novelist Tarun Tejpal at the launch of his book, The Alchemy of Desire.