What's common between TOI and Meera Syal? Ever used the word "dicky" in videshi company and have them sidle away in embarrassed silence? 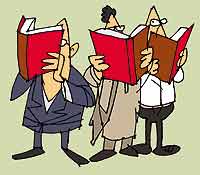 One of the best-kept secrets in the publishing world is the identity of the consultants who help screen the millions of new 'English' words for possible inclusion in the Oxford Dictionary of English. Did anyone know, for instance, that the oed has employed three or four Indian professionals whose job it was to come up with new Indian English words to include in the new Concise Oxford to be launched this week. The consultants, chosen by the OUP dictionary department, "took several months to compile material for the Indian English component of the dictionary", according to the dictionary's project manager in UK, Catherine Soanes. "Not only did they suggest new words, but they also commented on existing material in the dictionary." Who are they? Soanes will only say: "They include an academic, a teacher and a journalist."

At least 50 of the 1,700 new words in the new Concise Oxford are Indian English, making it one of the top sources of English vocabulary. Words we thought in our innocence were English have finally been given the Oxford nod: history-sheeter, sixer, batchmate, brinjal, buck, bogie, corporator, eveninger, gymkhana, lakh, crore, undertrial, prepone.... And of course, the words we deliberately injected into angrezi: adda, aloo, baba, babu, badmash, begum, Bhagwan, bibi, bundobast, burra, Burra Din, bustee, chacha, chai, chamcha, chappal, chota, dastur, desh, desi, devi, dhaba, didi, diya, dum, filmi, gherao.... The words were trawled from iwe fiction, newspapers, scientific journals and chatrooms. The TOI was one source, but more so was Meera Syal whose novels and TV comedies have made Hinglish part of angrezi slang.

Finally we can spare ourselves the blush. Ever used the word "dicky" in videshi company and have them sidle away in embarrassed silence? Now all they have to do is look up the new Concise Oxford to find its real meaning: n. Indian. the boot of a car.