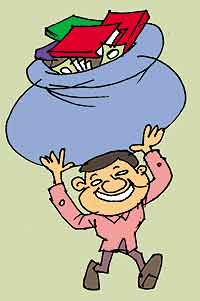 Former OUP editor and now co-publisher of Permanent Black, Anuradha Roy, walked away with the £500 prize (plus 25 Picador paperbacks) in this year's Outlook/Picador India non-fiction competition for her essay on food, Cooking Women. The runners-up were: Nilanjana S. Roy (English Vegetables, Desi Steak) and Kavery Nambisan (Dr Sad and the Power Lunch). The prize-giving party was a celebration for Picador too. So far testing the waters of the Indian market, Picador's new publisher Andrew Kidd outlined their plans to develop a modest list of both fiction and non-fiction specially for the Indian market. But Kidd, a former Penguin man himself, was quick to distance himself from the Penguin model of growth: "We are into quality rather than quantity," he said.

Two of Picador's leading authors made a surprise appearance at the awards ceremony—V.S. Naipaul and Pankaj Mishra. Picador will be coming up with their new titles later this year. Naipaul's latest is a novel, Magic Seeds; a sort of sequel to Half a Life. The characters are the same, according to Kidd, but it reads as an independent novel in itself. Mishra, after his debut novel, The Romantics, is coming out with a biography, The Life of Buddha. He has also been signed up for yet another non-fiction work: a travelogue. Yet another prized non-fiction title Picador's signed up—it will be ready sometime in 2006—is a history of modern India by Ramachandra Guha.

Publishers are normally cagey about discussing advances paid to authors, leaving it to the authors or their agents to inflate the figures to suit their ego. Why? "Asking a publisher about the advance paid to an author," says Kidd, with an English primness, "is like asking someone's salary." But Picador's legendary advances were not as loss-making as some of us thought. "They have all more than paid off," says Kidd. Yes, including Raj Kamal Jha's The Blue Bedspread.