What happens if you are the mother of a suitable boy? Why, excerpting rights from your forthcoming book witness a mother of all bidding battles. 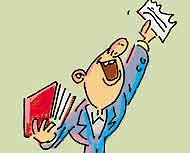 The birthday present former Chief Justice Leila Seth was planning for her husband on December 7 just got better. Thanks to her publisher Penguin's efforts, excerpts of Seth's autobiography, On Balance, were put up for auction. Blind bids from magazines and newspapers, famously niggardly about sparing space for books, started at a handsome Rs 10,000 and shot rapidly upwards in a few hours. And that's not all: the winner also had to promise suitable space, a cover mention as well as an interview with the author. While auctioning excerpts from potential bestsellers is now an established means of making money in the West, it's not quite taken off here. But then, not all books are by Vikram Seth or his mother.

One reason why every aspiring writer is on the hunt for a literary agent rather than a publisher is because agents have raised the art of auctioning manuscripts for an advance to unimaginable heights. David Godwin, the London agent famous for launching Arundhati Roy's career, is so deluged by Indian writers that at one time he even appointed a sub-agent to sift through the mountain of unsolicited manuscripts for that Great Indian Novel. But now the besieged agent has employed several secretaries to turn away beseeching novelists, most of them armed with recommendation letters, pleading overwork as a pretext.

But some writers unable to find a literary agent abroad are doubling up as their own agents. The first author to try his hand at auctioning his own book was former CBI director Joginder Singh. He invited some of the leading publishers to put in a bid for his memoirs on his CBI days. The publishers were willing to go up to Rs one lakh advance until Singh made the fatal mistake of showing them his manuscript. The bids abruptly stopped. Similarly, an ambitious first-time novelist started playing one publisher against the other until she got the advance she had in mind. By the time the publishers caught on to her game, the advance was already in her pocket.