Dirty But Clean Pierre; surprises in the latest Collins English Dictionary; and A Passage to India. 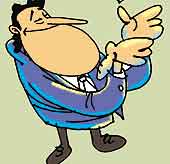 He’s been a filmmaker, cartoonist, smuggler before he’s hit pay dirt as an author. Dirty But Clean Pierre, the acronym under which Peter Warren Finlay wrote his book Vernon God Little, pipped Granta Best Young Writer Monica Ali and heavyweights Margaret Atwood and Martin Amis to win the 2003 Man Booker. Set in Martirio, Texas, the Australia-born, Mexico-bred, settled in Ireland author’s is the eponymous tale of a 15-year-old boy wrongfully accused of a high school massacre. Finlay’s debut was chosen for its linguistic energy, fed as it was by the 42-year-old writer’s self-confessed "deviating and mis-energetic" youth. No prizes for guessing where the £50,000 prize money will go: to repay maybe a third of his debts incurred during his swindling, drug-addicted and gambling past.

On an idle afternoon browse through our latest Collins English Dictionary, we found a whole new vocabulary for America’s war on terror. There is ‘Nine-Eleven’, in all its variants, make no mistake—September 11, 9/11, 9-11—as also ‘Al-Qaeda’, ‘Loya Jirga’, ‘regime change’, but no Osama. The war on Iraq too comes in, in the guise of that all-too-familiar acronym ‘WMD’—though again no Saddam. That’s because the 1,872-page Complete and Unabridged edition has given personalities, even Shakespeare and The Prophet, a complete go-by unless they appear as isms or adjectives. On the positive side, the dictionary takes note of that very Indian coinage—prepone—and for some strange reason even has the Sahitya Kala Akademi and coconut oil!

A new biography of Alec Guinness by Piers Paul Read (Simon & Schuster) reveals that af ter Guinness saw a private preview of David Lean’s A Passage to India, where he played Godbole, he went rushing to the bathroom and vomited. He was appalled at how he’d been forced to play Godbole and even more angry at how Lean had caricatured the only Hindu character in the novel.

Taking Off The Veil