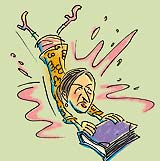 One of the most anticipated books of the year—Jhumpa Lahiri’s first novel, The Namesake—is likely to be a damp squib, if forecasts are to be believed. The novel, which comes nearly four years after her Pulitzer prize for her collection of short stories, The Interpreter of Maladies, is more or less about the same thing: Indian immigrants and their Americanised children. The story, set in Boston and New York, is about a homesick Bengali immigrant couple and their defiant Yale freshman son, Gogol, who resists his parents’ attempt to reclaim him in the cause of the Great Indian Tradition. Critics have slammed the book, to be released next month, as lacking plot and dialogue, bland, and disappointing. 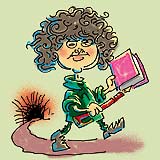 It seems the prolonged birth pangs were worth it. Raj Kamal Jha’s much-delayed second book is finally out in the UK and London critics at least are impressed by "the guilty dream conscience of Indian literature". If You Are Afraid of Heights is yet another exploration of Jha’s obsession with taboo subjects: this story is about a 12-year-old girl found strangled and raped at the bottom of a canal. Jha, it seems, is already bracing for the knives that are sharpening for his Indian launch next month. In one interview he gave at the Melbourne litfest, he was on the defensive for using themes such as rape and child abuse: "It’s still there, it’s where modernity still hasn’t come in. I think the major thing that has got to happen is to break that silence down." 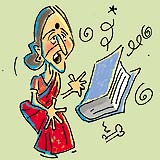 Our MPs are not exactly famous for their reading taste. But Sushma Swaraj insisted she cracked the secret of Congress spokesman Jaipal Reddy’s obtuse language. "All those incomprehensible words he uses are there in these two books I found in Khan Market," she told the House during the confidence vote. The books: One Thousand Insults and One Thousand More Insults. Now that’s really an insult to a book of insults!