Revisionist fictional takes on old classics seem suddenly in vogue. How about a novel on the Kurukshetra war as witnessed by a Pandava (or Kaurava) footsoldier?

June may be the hottest month of the year, but traditionally it’s hardly been the hottest month for book sales. Sales dip in June, as the heat and the rains keep all except the most ardent book reader away from book shops. But Penguin India has bucked this trend now for two years running. Last year, A.P.J. Abdul Kalam’s Ignited Minds hit bookstores in June and became a runaway bestseller, selling more than 10,000 copies in just two weeks. And this year, there’s a 766-page hardcover book for children featuring a boy wizard that seems to be rather popular. 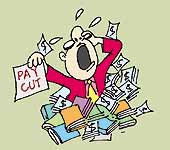 Joanne Kathleen Rowling will make untold millions of pounds from the sales of Harry Potter and the Order of the Phoenix. But her agent Christopher Little has just been handed a pay cut. Rowling has signed a new contract with her agent that stipulates that Little will get a four per cent commission on all subsequent sales of the Harry Potter books, instead of the customary 15 per cent on home sales and 20 per cent on foreign and movie deals. This is seen as quite an unprecedented deal in book publishing. But then, four per cent of untold millions should also be quite a sum. 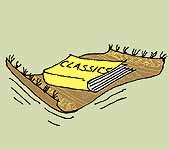 New revisionist fictional takes on old classics seem suddenly in vogue. First came Alice Randall’s The Wind Done Gone, which tells the story of Scarlett O’Hara and Rhett Butler from the viewpoint of Mammy’s daughter and the slaves at Tara. Now award-winning novelist and playwright Nancy Rawles has published My Jim, the story of Huckleberry Finn’s slave companion in his journey across the American South, through the eyes of Sadie, Jim’s wife who is also a slave. Bibliofile has a similar idea for budding novelists. How about a novel on the Kurukshetra war as witnessed by a Pandava (or Kaurava) footsoldier?