The passing away of Balwant Gargi; anti-US war books rake in the moolah and the '50 greatest adventure books of all time' 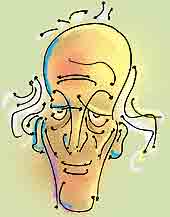 He was the author of India’s first kiss-and-tell memoir in English. And never quite lived it down, especially when his student mistress strode into his home and thrashed him for revealing details of their illicit love life. Balwant Gargi, who died of Alzheimer’s on April 21, was a leading satirist and dramatist in Punjabi, won a Sahitya Akademi award in 1962, and taught at the Washington State University. But it was his Naked Triangle that shot him into notoriety when it was first published. Gargi was one of Delhi’s Page Three writers before Page Three was invented, entertaining at his Connaught Circus flat a wide circle of friends which included film stars, socialites and writers.

The peaceniks may have failed to stop the Iraq war but they are boosting the sales of anti-US war books. Among the anti-war books soaring up the NYT bestseller lists is a collection of essays by journalist Greg Palast. Despite being blacked out by TV talk shows, Palast’s The Best Democracy Money Can Buy is now ranked fifth. Noam Chomsky’s 9/11 is still going strong with 205,000 copies. So is film-maker Michael Moore’s Stupid White Men, with 500,000 sales. Books on Iraq that are doing well are no longer the Saddam-bashing variety but on America’s war like Geoff Simons’ Targeting Iraq: Sanctions, Bombing and US Policy, and Gore Vidal’s Dreaming War: Blood for Oil and the Bush-Cheney Junta. 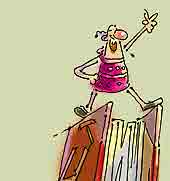 A panel commissioned by the Book magazine has selected the "50 greatest adventure books of all time". Homer’s Odyssey, Joseph Conrad’s Heart of Darkness, and Herman Melville’s Moby Dick are the top choices. Other favourites: Don Quixote, Adventures of Huckleberry Finn and Robinson Crusoe. Offbeat titles include Voltaire’s Candide (and you thought it was satire?) and even poetry—Samuel Coleridge’s The Rime of the Ancient Mariner (well, yes, now that you mention it, there is an adventure angle there).

Not Quite The Satanic Verse