Who says there's no money in writing non-fiction? There is something for everyone in the Iraq war. 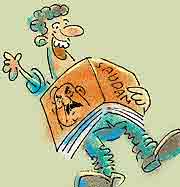 Saddam used some very unconventional methods to manufacture his bombs, if the authors of Saddam’s Bomb (Time Warner) are to be believed. In one meeting he hosts for his top nuclear scientists, for example, they are greeted by "half-naked girls who sashayed barefoot into the room" pulling out olives from the waistbands of their bikini briefs and dropping them into the bemused scientists’ glasses of martini. The book, first published in 1999 and written by Shyam Bhatia (editor of India Abroad) and Daniel McGrory (a staff writer on The Times) has all the unputdownability of an airport thriller—and all its claims to credibility. There’s more; Saddam, we’re told, became who he is because he was raped as a nine-year-old by three men who broke into his hovel in Baghdad, where his mother washed dishes at a dhaba. This was before she married a man who made little Saddam dance by thrashing his feet. 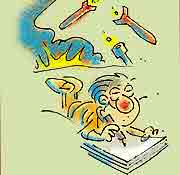 There is something for everyone in the Iraq war. Not least, publishers and literary agents prospecting for dramatic stories from the men at the centre of the action: the Allied soldiers. The hunt for action-packed memoirs started with the Afghan war two years ago when Andy McNab, authored by a special Air Services sergeant, became a multi-million-dollar success. Makes one wonder why no Indian publisher has yet approached a Commando for book and film rights. 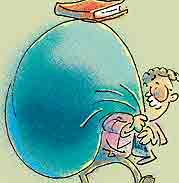 Who says there’s no money in writing non-fiction? Ramachandra Guha’s A Corner of a Foreign Field: The Indian History of a British Sport (Picador) has got into the running for Britain’s richest non-fiction award, the £30,000 BBC Four Samuel Johnson prize. So has William Dalrymple’s White Mughals: Love and betrayal in 18th century India. So have 16 other tomes, some of them quite esoteric. Like Dr Tatiana’s Sex Guide to All Creation, written as letters to an agony aunt. The winner will be announced on June 9.