So when did Ruskin Bond arrive in India? How is better -- flown in by a stork; summer sizzlers and the Americans Bookered.

Ageing writers sometimes have a lot to put up with, especially from brash newcomers in the literary world. Ruskin Bond recalls one occasion when he was accosted by a young Dhiren Bhagat. "Ruskin Bond?" Dhiren exclaimed incredulously. "I thought you were dead!" As it turned out, it was the thirtysomething Dhiren who died soon after, run over by a truck. "I believe he had also written a premature obituary for Khushwant Singh," Ruskin writes in a consolatory aside in his memoir, Landour Days (Penguin). The slim volume recounts Ruskin’s 40 years in Mussoorie, surviving on the small cheques the postman fitfully delivered while he churned out over 500 short stories in the old-fashioned way: in long hand scribbled in notebooks. The memoirs are unusual for their wry humour. For instance, to a question from a receptionist, "And when did you arrive in India, Sir?" Ruskin replied: "On 19 May, 1934. I was flown in by a stork."

Tis the season for memoirs. Penguin’s impressively long list of "summer sizzlers" has at least four biographies/memoirs, including Dr M.R. Srinivasan’s story of India’s Atomic Energy Programme and General Shankar Roychoudhury’s reminiscences. Even an academic publisher like Sage has brought out what it claims is "the first Dalit autobiography to be published in English". Vasant Moon, a retired civil servant who grew up in a jhuggi settlement in pre-Independence Nagpur, recounts in loving detail the lives and struggles of the outcasts who refused to call themselves Harijans, under the growing influence of Ambedkar. Another thinly-veiled memoir is Among the Chatterati, The Diary of a Page Three Hack, where Kanika Gehlot dissects "over-rated designers, narcissistic models, ageing beauty queens and second-rung politicians". 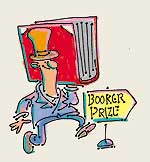 SO who’s afraid of the Americans? After the announcement that the Booker Prize will be open to American writers from 2004, the general fear among British and Commonwealth writers has been that American heavyweights will take over this "cosy British institution". But Indian heavyweights, including Salman Rushdie and Arundhati Roy, seem all for it. Says Rushdie: "...there’s really no logical reason for including Canadians, South Africans, Pakistanis, Indians, Australians, West Indians, etc, and keeping the Americans out."