Bhutto’s Promise: An Idea Has No Funeral

In 1967, Zulfikar Ali Bhutto launched a struggle for social justice when he founded the PPP. Whither his legacy? 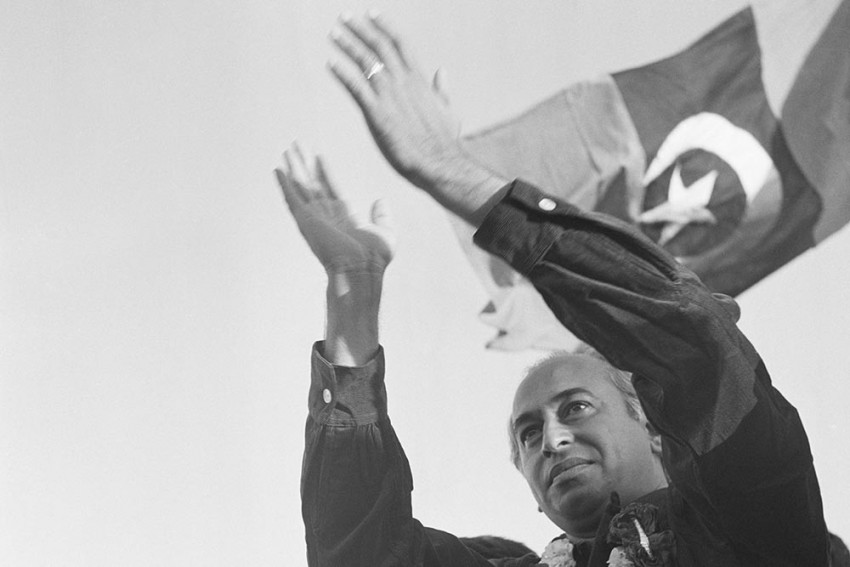 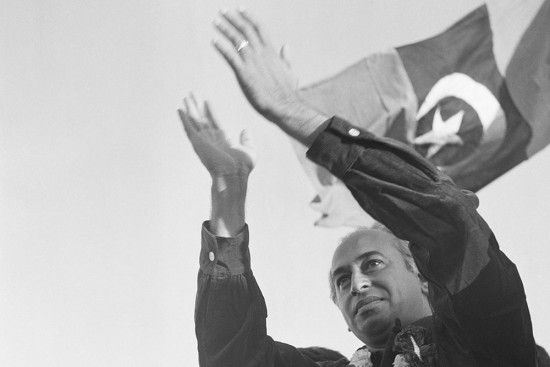 Lahore, a capital of ­empires from the Mughals to the Sikhs, is an elegant, manicured city. From its fertile, tree-lined canals and orderly chowks, there is no way to know what rebellions have been born on its soil. In 1929, Mahatma Gandhi raised an early version of India’s tricolour flag in this city and called for January 26, before it was known as ­Republic Day, to be marked as Independence Day in ­defiance of British rule. In 1940, the Muslim League ­gathered in the city to announce the formation of Pakistan. In one ­resolution, a united India was lost and a new country created. And fifty years ago, in 1967, it was in Lahore that Zulfikar Ali Bhutto formed the Pakistan People’s Party.

Bhutto, who resigned from his position as Foreign ­Minister in General Ayub Khan’s government after ­Tashkent and the 1965 war with India, had travelled the length and breadth of his country speaking to students, to union leaders, to the poor and the peripheral. He would launch his party, the first of its kind in Pakistan, under the slogan: “Islam is our faith, democracy is our polity, ­socialism is our creed—all power to the people.”

Till that point in Pakistan’s young history, free and fair elections had never been held. It was the PPP, its timely inception, the romantic vision of its politics and its bond with the people, forged at birth, that raised the warning that no longer would the country wait for its right to vote freely. Without a party like the PPP and Bhutto at its helm, would the wait have been longer? It is impossible to say, but to reach back into the past, to a point where the promise of Pakistan was pure and pregnant with hope, is to understand that it was this communion Bhutto had with the people that would seal his country’s, his party’s and his own fate. The world in 1967, Bhutto felt, was divided between “the hewers of wood and drawers of water on one side and those who wield mastery over the planet’s resources on the ­other”. To seek to empower those on one side was to existentially threaten the other. To speak of Third World solidarity, ­left-of-centre politics, socialism and sovereignty, as Bhutto and his peers did in the 1960s and ’70s, was to wrest something more than just dignity from the hands of the rich and the powerful; to quote one of Bhutto’s favourite writers, James Baldwin, it was to “look the world in the face like you had a right to be there”. And in doing so, to signal existing power structures with the threat of an attack.

Bhutto spoke this language as did a whole generation of Asian and African leaders, all shaking off centuries of colonialism. Indira Gandhi spoke it across the border. As did Kwame Nkrumah in Ghana. It was the same tongue young Algerians spoke to the French in: a language whose only grammar was liberty. It was this vision of Bhutto and his young party that would ­eventually see him killed and his party ­corrupted, its reins handed to the very powers that he ­endeavoured to shatter.

Who inherits an idea’s legacy?

What weight does blood carry if there’s only an empty understanding of any idea’s potential for alchemy? A man mimicking the memory of an idea bec­omes a marionette, a mime, forced to playact the symbols and the cues of the idea, while never grasping its heart, its essence, and ­ultimately, its power. Alternatively, even an outsider who uses proximity to bequeath herself as inheritor imagines that ideas can be owned, or occupied, like property. Both end up squatters. 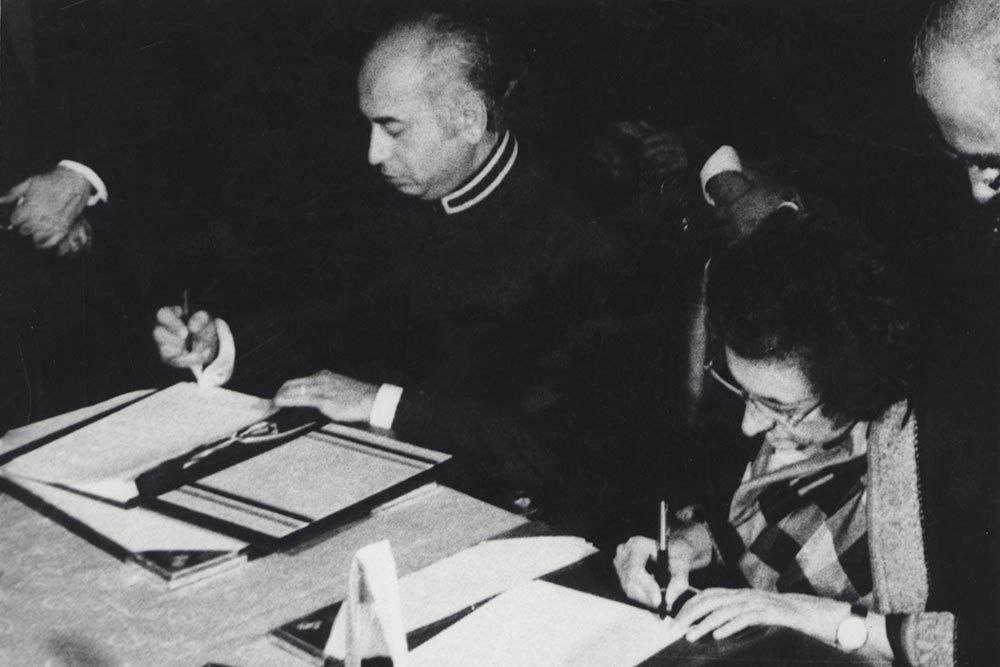 The true force of an idea is that it cannot be held. It travels promiscuously, merging with the atmosphere, unrestrained by attachments and undisturbed by time. Humans ­imagine themselves as the source and settlers of ideas, but we are too fragile, too temporal to do the ­dangerous work of ideas. The perishable cannot inherit the imperishable. Ideas belong to those who live and die in their practice. They belong to everyone they touch. The inheritors of an idea, any idea, are ­everyone—and fortunately, at the same time, no one.

The foundation day function of the ­Pakistan People’s ­Party was held under a shamiana, on a small patch of grass, in the residential neighbourhood of Gulberg, ­Lahore. ­Section 144 was in full effect across Lahore and its neighbouring ­districts and delegates travelling from East Pakistan were prevented from reaching the city. Men and women ­coming to the Punjab from Sindh and Balochistan travelled long hours and finally, with difficulty, some 500 delegates reached Lahore on the morning of November 30, 1967, for the first session of the founding convention of the PPP.

Once the delegates had registered their names, two poets stood and recited verses in Urdu that had been written for the occasion. Bhutto spoke emotionally that first day about the “monstrous economic system of loot and plunder” that was cannibalising the country. The PPP’s economic policy would be led by social justice, he promised. Pakistan’s “fundamental national problems had not been referred to the people at any time,” Bhutto continued, and they alone “could finally settle the issues and the final nature of their state and government”. It is this promise, this oath, that the people remember Bhutto for. He was the first of ­Pakistan’s modern leaders to look to them for answers, not for blame. “We respect tradition,” Bhutto ended his welcome speech that day, “but will oppose the bad in the old. We respect only those traditions that are ­beneficial to the people of ­Pakistan, not those that are ­dragging the country backwards…. We will give our country a new outlook, we will give Pakistan a new ­revolutionary form.” 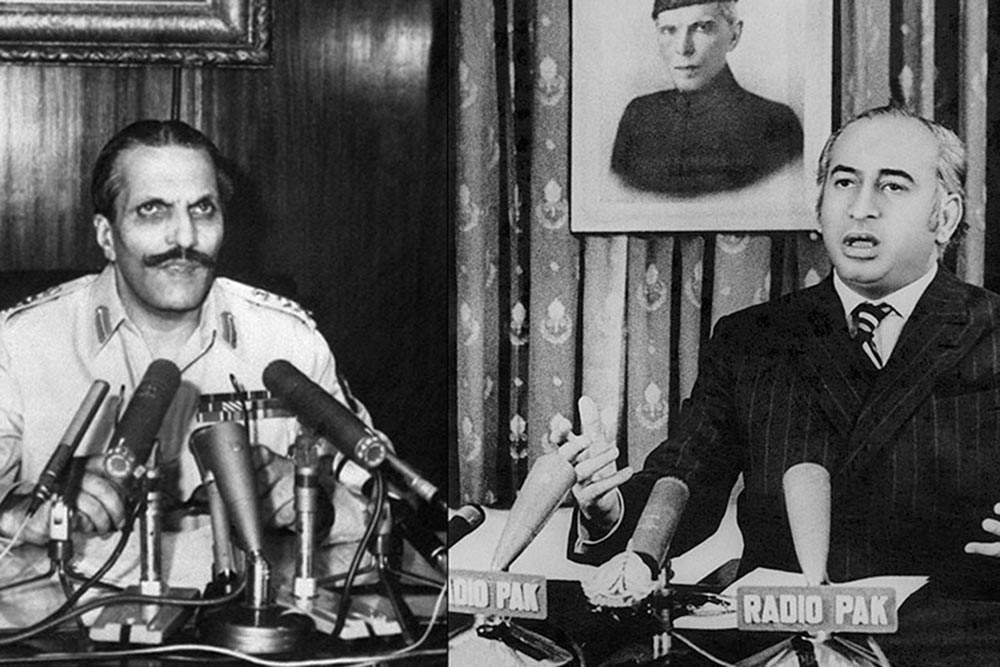 The character that would come to define Zulfikar Ali Bhutto’s PPP was fully ­present in the two days that it was launched in Lahore. Resolutions were passed paying homage to the people of Vietnam, Palestine and Kashmir, calling for America to vacate all Pakistani military bases (on ­account of their no-show presence during the 1965 war, despite the numerous ­mutual defence agreements that were in force between the two countries), and raising the banner of Third World ­solidarity. “Our unity is not directed against any creed, ­religious or ­secular. It is not nourished by hate or rancour. Its drive and force is a passion for justice,” Bhutto declared.

Party elections were instituted, a draft manifesto was adopted and poetry was read every day. In the last session, on December 1, 1967, the name of the party was settled on—after suggestions including ‘Socialist Party of Pakistan’ and ‘Pakistan Progressive Party’ were rejected—and Bhutto was elected chairman.

Zulfikar fought to build Pakistan into a progressive, free and sovereign country. The only thing today’s PPP fights is corruption cases.

The story of the PPP cannot be told without Bhutto. It was born with him and of him; though it resounds in our ­memories and dreams, today the party that bears its name cannot be considered anything resembling the Pakistan People’s Party. The party of 2017 belongs to no ideology, serves no justice, and has not one strand in common with the party Bhutto founded in 1967.

Though today’s PPP uses Bhutto’s image and his death as wallpaper, plastering it to cover their sins, it can never be believed that they are the heirs of 1967. Its captains are oligarchs and criminals; its only concern is how to maintain a throne built of sand. To compare the two is to humiliate the original. And perhaps that is what politics in Pakistan is today, constant acts of auto-humiliation, inflicted on the public day after day, ­election after election. 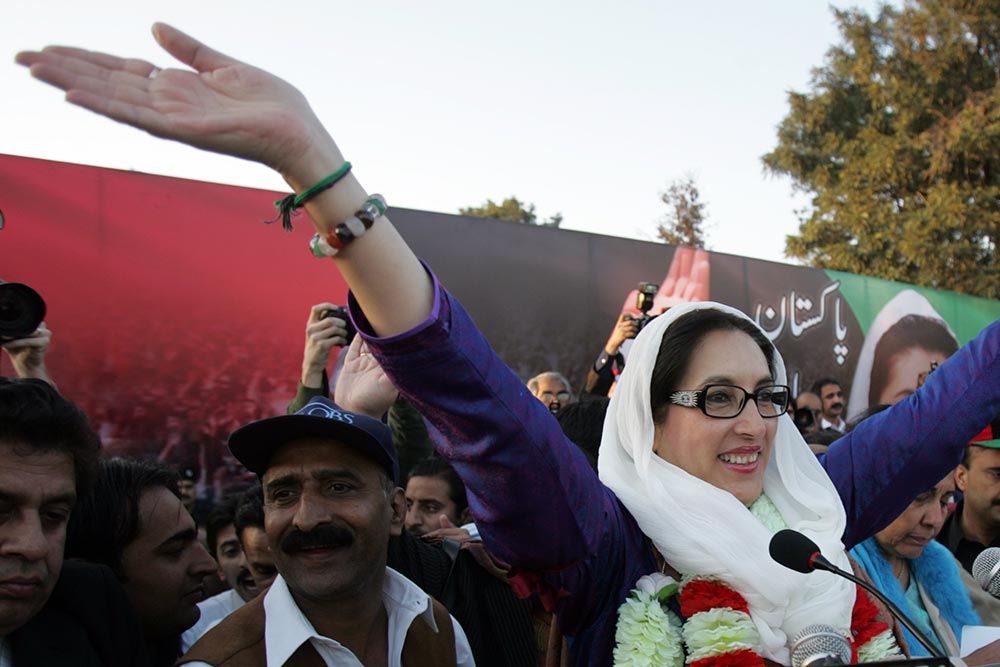 Zulfikar Ali Bhutto removed Pakistan from the ­Commonwealth, stormed out of the United Nations, tearing his papers as he left, and begged clemency from no man as he stood before the gallows. He fought to build Pakistan into a progressive, free and sovereign country. The only thing ­today’s PPP fights is corruption cases. With what ­seriousness can one claim that the PPP today, which has conducted itself with remarkable obsequiousness towards both the military and a foreign ­superpower, is a worthy inheritor of  the name it bears?

It presided over more than 300 drone att­acks against ­Pakistan by America, ­allowing them as the cost of doing business with America. And by doing business let us be clear—Pakistan was no equal partner in that equation, but rather a recipient, awaiting aid and favours. In 2010 alone, ­predator drones launched a total of 128 strikes against ­Pakistan. According to the Bureau of ­Investigative ­Journalism, America launched more strikes against ­Pakistan than any other country beyond ­Afghanistan. This same corrupt cabal of ­pretenders to the PPP are the ones who also allowed ­Raymond Davis, a CIA ­contractor, to kill Pakistani civilians in broad daylight and then—having paid them in their favourite currency, blood money—to escape the country.

On the 50th anniversary of its founding, those of us who love the ideas and the beautiful struggle that Zulfikar Ali Bhutto’s PPP was born to fight can see that it is represented by nobody in Pakistan today. But though its form is not present today, the PPP that was birthed fifty years ago is not dead. It remains in the earth, in the atm­osphere, in the people who believed in it, who sacrificed and died in its service. How can such an idea be erased? It cannot. It will always be with us, no matter what has been done to it. It lingers in the trees that still line the banks of Lahore’s canals. 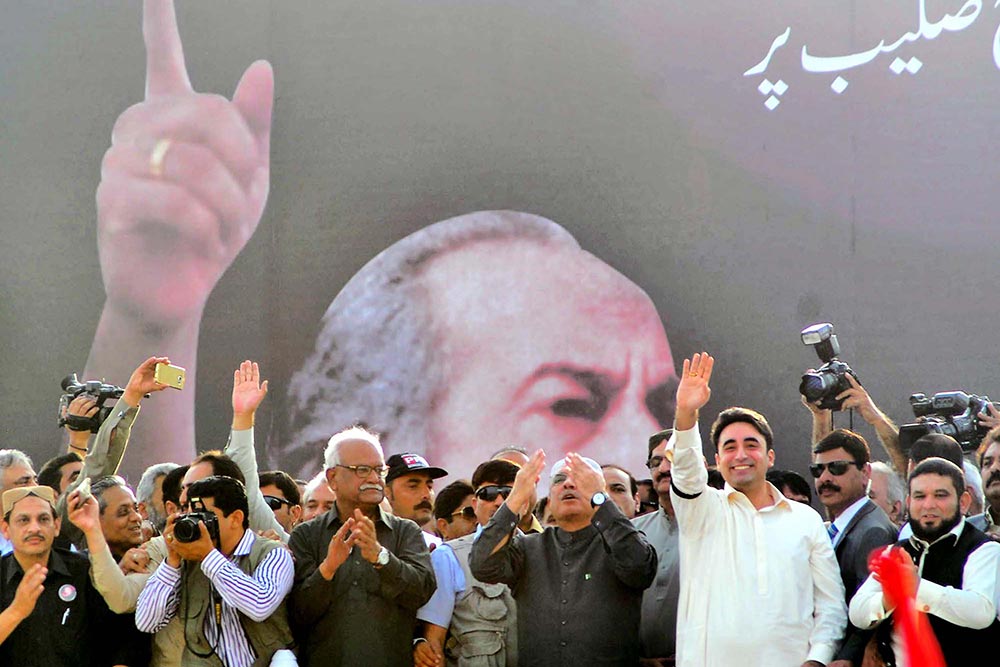 When I think of the violence done to the party that Bhutto founded—betrayed from the inside, from the outside, from quarters near and far, shaken by mass arrests, ­floggings, ­harassment, assassinations—I return to Baldwin, whose books line the shelves of Bhutto’s library in Karachi. “Force,” Baldwin said, “does not work the way its advocates seem to think it does. It does not, for example, reveal to the victim the strength of the adversary. On the contrary, it ­reveals the weakness, even the panic of the ­adversary and this revelation invests the victim with patience.”

The party, the original essence of the party, remains because no man, no woman, can destroy an idea. How, then, are we to understand such a rich ­inheritance? The meek shall inherit the earth, say some. Others hold that true belief is born in practice and others know it is cast in struggle. The Pakistan People’s Party was once created to serve the dispossessed and the invisible and, somewhere between the confluence of these energies, it will be born again.

Fatima Bhutto is a writer and novelist. She is also the grand-daughter of former Pakistan Prime Minister Zulfikar Ali Bhutto

The Seeds Of Truth Grew Revolution