Don't know about Shashi Tharoor, but the UN is all ears for a Bangla rock band 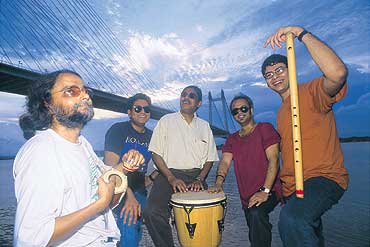 Bangla rock group Bhoomi zoomed to fame with its 1999 song, Barandaye roddur, about a man running to answer the doorbell, only to be disappointed time and again since the one he was waiting for didn't come. But when the doorbell rang at its lead singer Surojit Chatterjee's house last month, he certainly wasn't disappointed. In fact, he was jubilant. The postman handed him a letter from the United Nations—an invitation to perform at the Dag Hammarskjold Auditorium at the UN headquarters complex in New York! Only three other Indians have received such an honour—M.S. Subbulakshmi, Pandit Ravi Shankar and Lata Mangeshkar.

But perhaps this rare honour was only to be expected—Bhoomi is much more than just a highly successful rock band. It has evolved into a phenomenon and commands a following in Bengal that would be the envy of any music group or singer in the world. Consider this: Debashish Biswas, head of paediatric cardiology at Apollo Gleneagles Hospital, recommends Bhoomi songs to calm high-strung kids and says the songs help develop children's brains; Manjula Bose, one of the first woman judges of the country, says the group's songs "mesmerise the mind, captivate the heart and uplift the soul"; while Sanjay Mukherjee, a DIG of police, says Bhoomi's songs are the only Indian ones he listens to.

And these are only a handful of the millions across Bengal (and Bengalis living in other parts of the country and the world) who swear by Bhoomi.

Bhoomi's success lies in its earthy appeal, the innocence that comes through its songs, the celebration of life and the exuberant mixing of different folk forms and instruments. The group draws from a potpourri of folk styles from Bengal and the rest of the world like Baul, Bhatiyali, qawwali, lavani, reggae, rap, rock 'n roll. The eclectic music they produce is also the result of a happy mix of instruments from all corners of the globe—thumbas, bongos, dotara, djembe, drums, violin, flute, khanjira, mandolin, banjo, khamak, matka, handi, guitar, castanets, tambourine, kanshar ghanta, conch, resso, blues harp, pan flute, spring drum, steel drum, melodica, harmonium, piano, moorcing, ektara, tabla, balalaika, dugdugi, dubki, edakkaii, cowbells, chimes, dholak, khol and madol, among many others.

Bhoomi was formed in '97 by Soumitra Ray, the group's lyricist, composer and anchor together with lead singer Surojit, bassist Abhijit Ghosh, violinist/keyboardist Robin Lai, percussionist Sanjoy Mukherjee and lead guitarist Hemanto Goswami. Though noticed by discerning music lovers, it took them a few years to gain mass following. In '03, the group travelled out of Bengal for the first time, to San Francisco and LA. They drew such applause that the expatriate Bengalis got them over the next year as well. In '04, they performed at Boston, Atlanta, Dallas, Sacramento and NY, where some UN officials heard them. The invitation to perform at the UN this July is a glowing tribute to Bhoomi's unique music, whose appeal cuts across all cultures and nationalities. "That'll be our 880th performance," says Soumitra.

"We want to take our Bangla music where singers like Daler Mehndi have taken Punjabi folk songs—with people all over the world dancing to Bhangra beats." Right now, they're busy putting the final touches to an English number (their first) they've penned specially for the UN performance. Titled For a better day, the song speaks of the brotherhood of man. "We'll make them dance!" declares Surojit. That should be quite a sight—poker-faced UN diplomats dancing to Barandaye roddur, just like the audience in back-of-beyond Bankura!