Days after having watched this film I'm still recovering. The plot is a convoluted mess and acting? Well what's that? 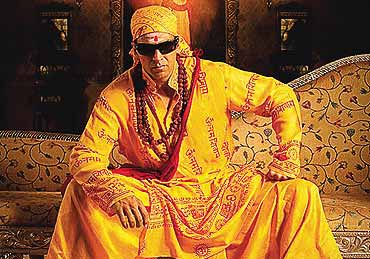 Days after having watched this film I’m still recovering. Based on the Malayalam film, Manichitrathazhu, Bhool Bhulaiyya is Priyadarshan trying to ape the Ramsay Brothers. So horror comes mixed with silly comedy. There is the familiar gallery of buffoons headed by the perennially loud Paresh Rawal and Rajpal Yadav. They live in a strange village that has no sense of location. The centre of action is the king’s haunted haveli, complete with creaking doors and ghungroos. Things come to a head when the haveli heir (Ahuja) returns and his wife (Balan) opens a forbidden door to unlock the resident ghost. Meanwhile, a psychiatrist friend (Akshay) is called to treat an ostensibly loony cousin (Patel). He eventually ties up with the local tantrik to bust the ghost. The plot is a convoluted mess and acting? Well what’s that? The dumbest act is the director’s: getting the star of the show Akshay minutes before the interval and doing away with the song, Hare ram hare ram.