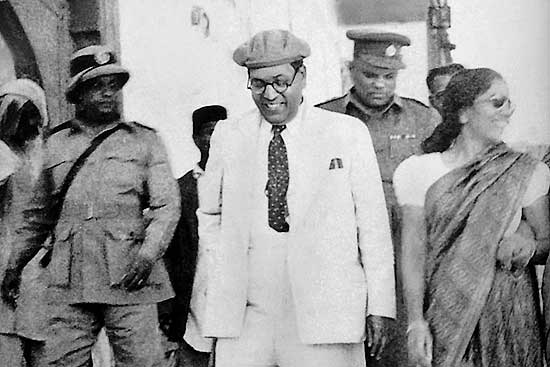 Bhimrao Ramji Ambedkar always feared that the Hindus, specifically the caste Hindus, whom he often addressed with the cold appellation—Touchables—would gang up communally, pose as a political majority, and run away with what he called the ‘title deeds’ of democ­racy. The usage of this heaped category that lumps close to 65 per cent of the subcontinent’s population (52 per cent obcs plus the rest of the privileged dwija/twice-born communities), problematic though it is, indicates a shift from an earlier, more nuanced position Ambedkar held in 1931. That was when he saw the various jatis belonging to the four varnas—Shudra, Vaishya, Kshatriya, Brahmin—as “a gradation of castes forming an ascending scale of reverence and a des­cen­ding scale of contempt”, a system he believed “gives no scope for the growth of that sentiment of equality and fraternity so essential for a democratic form of government”.

A lot had changed from 1931 to 1945, but Ambedkar was still smarting from the defeat inflicted on him by the blackmail fast his principal adversary, Mohandas Karamchand Gandhi, undertook in Poona in 1932. Till the success at the Round Table Conference in 1931, Ambedkar was coasting along. With the Mahad Satyagraha (1927) and stellar performances in the Bombay Legislative Council behind him, he had come to be seen as the distinctive voice of the Untouchables. He consistently argued that the Untouchables should not be clubbed with Touchable Hindus. This position—echoed previously by Panditar Iyothee Thass (1845-1914), the radical Tamil Buddhist thinker—was first articu­lated by Ambedkar during his submission to the Southborough Franchise Commis­sion in 1919, where he submitted that the Untouchables formed “a separate element in India’s social life”, and hence were a social minority. Chandra Bhan Prasad, in one of his 2003 Dalit Diary columns, said: “That was Ambedkar’s first political statement.”