From Ambavadekar to Dr Ambedkar, the shaping of India’s Dalit icon 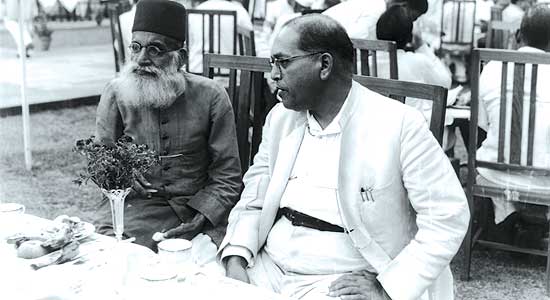 In the west-facing corner of the first-floor library that metamorphosed into the Ambedkar home is situated an angular room that Dr Bhimrao Ramji Ambedkar spent considerable time in while in Bombay. The study opens out onto a balcony overlooking Dadar station, where Ambedkar appeared occasionally to greet an eager crowd of supporters gathered below. “I have heard him, pushing us all to study hard and rise in life,” recalls the white-haired Tukaram Londhe, a teenager then who’s spent decades here as attendant at ‘Raj Griha’, the Ambedkar home in the ironically named Hindu Colony.

The balcony, the study, the winding staircase that leads to it, indeed Raj Griha itself, is as nondescript as any other two-storey building in the colony. It has seen better days. In the study, Ambedkar’s four-feet-wide table and personal chair are still in the position they were through the 1930s, ’40s and ’50s. Two old chairs and a sofa complete the seating. His C-shaped bookcase still holds the volumes that he had leafed through. As one’s fingers glide over the solid table, it is not difficult to imagine Dr Ambedkar seated there, writing and fine-tuning drafts of many a volume, drawing on his memories and experiences.

Dr Ambedkar, as his grandson Prakash Ambedkar sarcastically remarks, had a rich and large treasure of experiences and influences to call upon, as he pushed millions of Indians, British rulers, the Indian National Congress and Mahatma Gandhi into acknowledging the dehumanisation of the untouchables. In October 1948, as he presided over the Drafting Committee, he completed The Untouchables—Who Were They And Why They Became Untouchables. The first copy still stands in his bookcase. The dedication reads: “Inscribed to the memory of Nandanar, Ravidas, Chokhamela—three renowned saints who were born among the untouchables and who by their piety and virtue won the esteem of all.” Dr Ambedkar may well have been talking about himself; beyond the obvious references, the inscription is a pointer to some of his earliest influences.

The young Bhimrao through his childhood years in Dapoli and Satara saw his father, a military officer, live as a devoted Kabirpanthi advocating anti-idol worship who strangely insisted that his sons read the Ramayana and Mahabharata every day. Bhimrao, in his unpublished preface to The Buddha and his Dhamma, writes that he could not reconcile the contradiction, though he soaked in the influences, just as he could not comprehend why he was made to sit on the floor in a corner of the school classroom, or had to go thirsty but could not go to the common well, or boys in the classroom ran to “rescue” their tiffin boxes the only time he went near it. Bhimrao Sakpal Ambavadekar, his surname coming from his native village Ambavade, learned to live with the injustices without even recognising them as such, until later when he walked through the portals of Columbia University. At the Satara school was a Brahmin teacher who left a lasting impression—during lunch hour everyday he would quietly walk up to Bhimrao to drop a part of his meal into the young boy’s hands. “He took so much fancy to the boy that he even changed his surname from Ambavadekar to his own surname Ambedkar in school records...Ambedkar gratefully remembered this teacher,” writes biographer Dhananjay Keer.

Gautam Buddha came into Ambedkar’s life rather accidentally. When he completed his matriculation in 1907, his community wanted to felicitate him as he was the first boy to do it, but his father would have none of it. His father’s friend and literary figure Dada Keluskar prevailed. Keluskar even presided over the function and gifted Bhimrao a copy of his book on Buddha’s life, written for the Baroda Sayajirao Oriental Series. Ambedkar recalls in an unpublished reference: “I read the book with great interest, and was greatly impressed and moved by it.”

During his five years in Elphinstone College, Bombay, he met the reform-minded Sayajirao Gaekwad III of Baroda who offered a monthly scholarship and learned of a Mahar conference in Jejuri organised by Shivram Janba Kamble, an early reformer. Incidentally, Gaekwad, much to the chagrin of caste Hindu guests, sat and ate a meal with Ambedkar there. All this left an impression on Ambedkar as he reached Columbia University in 1913 as a post-graduate student where he formed the intellectual connections and personal relationships that were to shape much of his life’s work.

“The best friends I have had in life were some of my classmates at Columbia and my great professors, John Dewey, James Shotwell, Edwin Seligman and James Harvey Robinson,” wrote Ambedkar in the Columbia Alumni News, December 1930. Of them all, he considered Prof Dewey, one of the major philosophers of the 20th century, and Prof Seligman, a well-known economist, as his hero and mentor respectively. When he wrote his seminal work Annihilation of Caste in ’36, he referred to Prof Dewey “who was my teacher and to whom I owe so much”.

For a boy who had to fight to be at school and was not permitted to learn Sanskrit, he had an MA in Economics with Sociology, History, Anthropology and Philosophy from Columbia University. This was a major inspiration for him to study law as well as to go to LSE, says Prakash Ambedkar. “And beneath it all was a strange mix of the mysticism of saints and some strands of Marxist philosophy with Buddhist humanitarianism. An original, perhaps unique, set of influences,” he adds. To this amalgamation, Ambedkar brought his study of law—he was later the principal of Government Law College in Bombay and established the Siddharth College of Law in addition to the Siddharth College of Arts and Science through his People’s Education Society—all of which segued into his work, writing, indeed, his life. The stamp, says Prakash, is there on the Constitution of India.

In Raj Griha, a part of which is now People’s Education Society premises with the Ambedkar museum and library, the sense of history is still strong. Amidst his personal collection of books, letters and photographs, especially in the study, the man’s presence is palpable. Two young men from Mahad, where Ambedkar broke convention by drinking water from the public tank, stroll in. They solemnly pay their respects at the bust. On their way out, they call out a greeting “Jai Bhim,” Ambedkar’s greeting-cum-war cry to the millions who were not permitted to say “Jai Siya Ram”. Londhe smiles back with a “Jai Bhim” of his own.