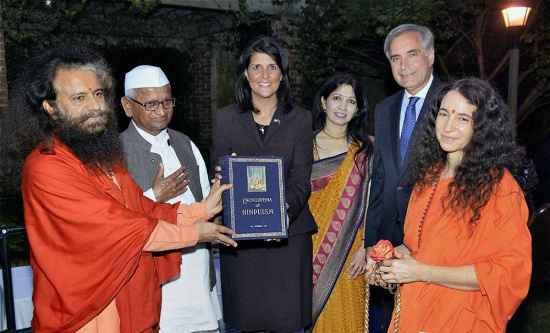 Have a question about Hinduism? Now you need look no further. The Encyclopaedia of Hinduism—11 hardbound volumes with full-colour illustrations—is here to enlighten you. The encyclopaedia, which was 25 years in the making, is the brainchild of Swami Chidanand Saraswati of the Parmarth Niketan in Rishikesh. A frequent visitor to the US, Swami Chidanand realised a desperate need for a go-to book on Hinduism and its traditions to answer the many questions that surfaced in the West, especially from children of the growing Indian diaspora.

“The Indian cultural, spiritual tradit­ion—the history, the philosophy—all of that will be properly understood here in the West,” Sadhvi Bhagawati Sar­aswati, managing editor of the Encyclopaedia of Hinduism, told Out­look. “There are so  many misconceptions, so much misinfo­r­mation about Hinduism and Indian cul­­­ture. There are many books on the sub­­ject, but when one looks for som­e­thing authoritative, definitive, unb­i­a­sed, aca­demic, that text had not yet exi­sted.”