Husain’s canvases, absorbent of India, were coloured by the times 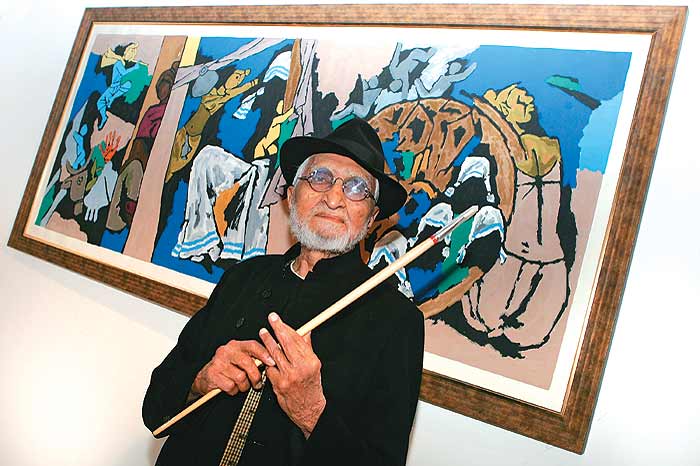 For a moment in the 1980s, my brother’s hand was briefly worth a small fortune. M.F. Husain was a frequent visitor to our landlord’s home in Delhi, and unlike the Calcutta Club, which memorably evicted the artist for lack of appropriate footwear, the barefoot artist was welcomed by Mr Dhillon and his family.

My brother was a toddler with an explorer’s zeal for new territory, and he once escaped from our house to wander in the Dhillons’ garden. He was restored some hours later, in cheerful spirits; he had chatted with the artist, who had drawn a story on his hand.

Husain already had a towering reputation, had been awarded the Padma Bhushan, and was one of the best-known of the Bombay Progressive Artists Group, though his canvases had not yet sold for the stratospheric prices they would command in the art auctions of the 1990s. The discussion on how best to preserve a miniature modern masterpiece worth thousands was, sadly, terminated by my brother, who was found washing garden dirt and Husain’s birds off his grubby paws.

There may have been no modern Indian painter as prolific as Husain, though. His collected canvases ran into the thousands. His sketches in blackboard chalk were on display at Kovil in Delhi’s Connaught Place, carelessly tossed off, eagerly preserved. Meeting him at his studio in Delhi in the early 1990s, I knocked a large file off the table.

“Throw it in the trash,” he said, busy pulling out some sketches from the 1960s. The file was filled with old brochures from art shows—and new drawings. He shrugged and stuffed the drawings back into a drawer. “That’s a few lakhs more in the bank,” he said. And he continued talking about Rembrandt, one of his early inspirations, and how he had been haunted by the faces in Rembrandt’s portraits as a young man aspiring to be an artist, painting portraits obsessively. 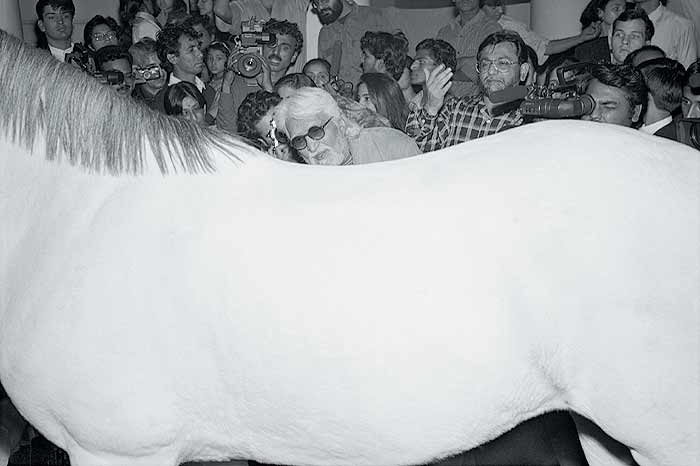 Husain at work on a live variation of his equestrian theme

Those two sides coexisted without apparent contradiction: Husain the artist in love with his work, Husain the showman in love with the prices his canvases commanded. He told a revealing story about his early life as an artist in Indore, where his family had moved from the temple-town of Pandharpur. His father took him to art school, but MF, looking at the work of final-year students, decided he could do better than that. He was proud of this, and told this story much more often than the sentimental story about him working as a billboard painter in Bombay—which he did, briefly, along with whitewashing walls, until he found his niche with F.N. Souza and the rest of the Progressives.

Husain was good at gimmicks. In the late 1960s, he rented an art gallery and painted in public for 40 minutes every day. In later decades, there would be the Svetambara exhibition, where he covered a gallery with crumpled newspapers; and the famous obsession with Madhuri Dixit, which he tried later to replicate, unsuccessfully, with more forgettable Hindi film heroines. He loved his cars—he had more, he boasted, than Bhagwan Rajneesh—and was especially pleased to add a Bugatti to the roster of Jaguars and bmws after his sad self-exile to Dubai.

Those who say M.F. Husain should have held his ground and fought the relentless tide of attacks on him and his art forget that he had stayed, for a decade-and-a-half. He joined a beleaguered and illustrious roster that included Salman Rushdie, Deepa Mehta, Habib Tanvir, Vijay Tendulkar, Taslima Nasreen and several others, victims of an orchestrated, cynical intolerance.

We watched as hate-filled bigots tried to deny Husain the right to his own traditions and history.

What happened in those decades? From Husain’ s perspective, his art exhibitions were stormed by the Shiv Sena’s goons, his studio desecrated, his paintings destroyed. Galleries he had worked with for years would no longer display his work, though Husains were still displayed in corporate boardrooms, like balance-sheets. His paintings of Bharat Mata and Saraswati were called obscene, often by those who had not even seen the works in question, but who were actually disputing the right of a Muslim artist to paint Hindu icons. A landmark 2008 judgement upheld his right to freedom of expression, but by then filing cases against M.F. Husain had become a useful means of harassment.

There was very little genuine outrage in all these decades against Husain; almost all of it, from the crowds who smashed paintings in the Amdavad ni Gufa (designed by him and Balkrishna Doshi) to the righteous indignation expressed by those who said he had desecrated ‘their’ goddesses, was carefully manufactured, as Salil Tripathi documents in his book on censorship.

For those with little access to the English language media, attacking a celebrity like Husain had many benefits: it allowed right-wing politicians to make a name for themselves, it brought in massive publicity, and it blocked the open discussion of history, art and ideas. The damage done to freedom of speech and free expression was almost incidental, almost a byproduct of the real agenda, which was to demonstrate who wielded power in today’s India. And he was an equal-opportunity offender, facing the bigotry of Islamic groups for carrying a qawwali in the film Meenaxi that apparently contained words from the Quran.

The real crime against Husain was not even the destruction of his paintings, or the twisted process by which his images of an exhausted, drained Bharat Mata or a lively Saraswati were rendered ‘obscene’ in the public mind. His paintings of goddesses, like his raga series, like his beloved horses, like his almost childish fascination with cinema, came from being an equal inheritor of the Hindu tradition, of growing up knowing the Ramayana as well as he knew the kalma. The real crime we committed against M.F. Husain was to watch helplessly as a tiny, hate-filled set of bigots attempted to deny the artist the right to his own Indian traditions and his own history.

Neither of the two images that linger in my mind are of M.F. Husain the showman, or Husain the flamboyant, media-loving artist. One is of an old man in his nineties, too tired to fight any more battles, leaving his country unwillingly for Dubai, on the back of a series of compromises. The other is of a barefoot artist with a generous heart who took the time, on a long-ago Delhi afternoon, to make a child happy with a story and a priceless scribbled bird.

Caught In A Pincer