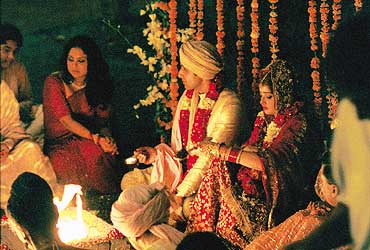 Very much like Nair's film itself, really. Monsoon Wedding, the peripatetic director's sixth full-length feature, is a long, rambunctious party, except that, in the words of Sunil Sethi, Limelight anchor and friend of Nair, "skeletons keep tumbling out all the time" as it goes on. This 110-minute low-budget ensemble family drama is about a jovial, upwardly-mobile extended Punjabi family congregating in a plush Delhi farmhouse for a four-day wedding where old connections are revived, petty and personal wars are fought and dark secrets creep out of the woodwork—a part-happy, part-picaresque look at the ways and workings of the great Indian family in today's globalised world. Enough to turn on the seven-member jury-led by celebrated Cannes-award winning Italian director Nanni Moretti—of the Venice Film Festival last week: it conferred the prestigious Golden Lion award on Nair for the film. In the process Nair, 44, became the first woman and second Indian after Satyajit Ray to pick up this prestigious award at the world's oldest film festival. "It's changed my life all right," she says, between some 200 interviews in Venice and Toronto over the past week.

Like the film, Nair's triumph at Venice unspooled dramatically. After showing Monsoon at the festival, she had flown back to New York to put finishing touches to her latest feature Hysterical Blindness, a slice-of-life film for hbo about two women looking for love in New Jersey, starring Uma Thurman and Gena Rowlands. That was when the festival authorities rang her up in Big Apple asking her to return immediately to Venice during the weekend for a ceremony. Says she: "I had no idea why they were calling up."