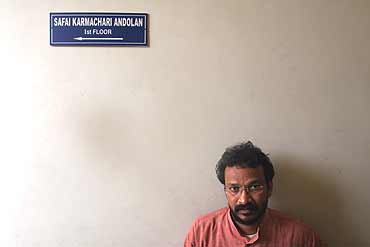 Bezwada Wilson was born in Karnataka’s Kolar gold fields, but the only local product he and fellow Dalits from the Telugu-speaking Madiga community handled for decades was human excreta in community dry latrines. Recalling his first direct encounter with manual scavenging in 1989, Wilson says: "I wanted to die." Instead, he began waging a war against the dehumanising practice, which despite a ban in 1993, still continues, including in government institutions like the Indian Railways and army cantonments. There are officially 6.76 lakh manual scavengers in India, though unofficial estimates put the figure at 13 lakh. A PIL petition filed by Wilson’s Safai Karmachari Andolan (SKA) in 2003 resulted in the Supreme Court demanding affidavits from various states. Most states were in denial mode. But in Andhra Pradesh, SKA proved that dry latrines existed with video and photographic evidence; then it began demolishing them—over 2,000 of them. Wilson, 41, says he won’t rest until he destroys India’s last one.