Bezwada Wilson has transformed himself into an extraordinary activist, a great campaigner against discrimination and ­injustice, and a mesmerising speaker, writes Aruna Roy. 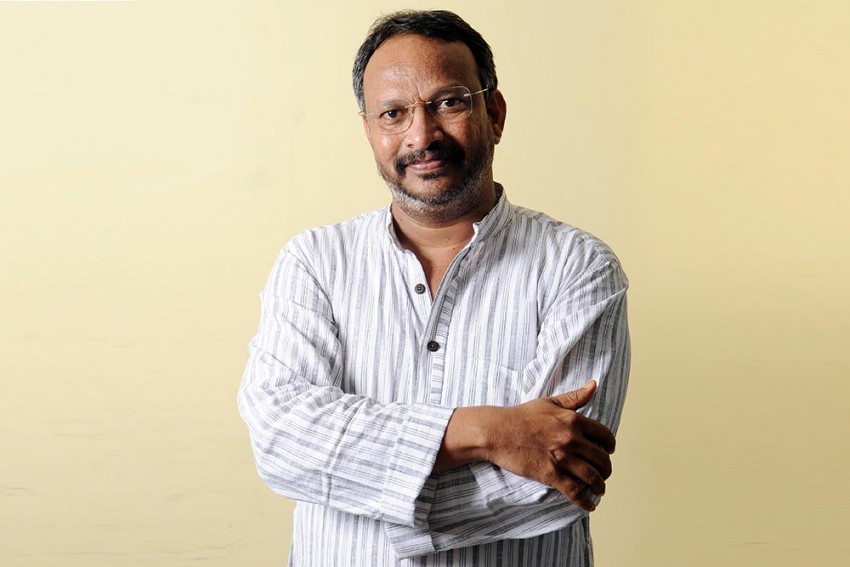 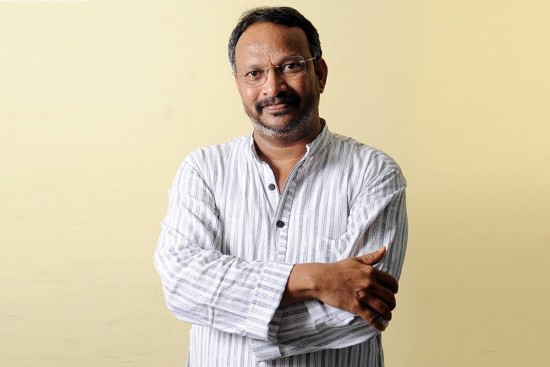 Bezwada Wilson of the Safai Karamchari Andolan has turned the inherently ­discriminatory circumstances of birth into a school of resistance. He has transformed himself into an extraordinary activist, a great campaigner against discrimination and ­injustice, and a mesmerising speaker. A friend listening to Wilson talk in a public lecture said, “His language has the raw truth of unadorned thought and emotions; language has the feel of life, and in his hands is a powerful tool of communication”.

He founded the Safai Karamchari Andolan (SKA) with the objective of putting a decisive and uncompromising end to one of the worst practices in existing human social systems in the world: to liberate manual scavengers condemned by caste to collect human excreta, euphemistically called “night soil”. This practice is a shame, a crime, and an indictment of all of India’s claims to progress. Indian technological claims stand condemned and exposed by the continued existence of dry latrines, and the cleaning of “gutters” by human beings who descend into the worst of all hells. His concerns have pushed him into a wider intellectual space—forcing affluent India out of its cocoon of comfort, to acknowledge its own direct role in the layered complexity of oppression. Wilson is a feminist, demanding self-reflection on gender discrimination within Dalit communities and a protagonist against marauding technology applications that come disguised as liberators. He fights shoulder to shoulder with others who have the courage to stand up to the abuse of power and continue the struggles to protect democratic rights.

Wilson’s greatest role has been to draw attention persistently to the horrors of the lives of safai ­karamcharis while fighting for ­redress through legislative measures.

The legal ban on the practice was enacted in 1993. Ironically, the ‘Swachh Bharat’ campaign of the past four years has further entrenched prejudice and obfuscation by not focusing on the need to first clean up caste prejudice. In an India running to tote up brownie points for progress, the present dispensation can think of nothing more than a technocratic Swachh Bharat, which does not address the caste-based role ascribed to Dalit communities to clean up other people’s filth. If anything, the caste card has been exploited mercilessly in the past four years to deepen divides. Atrocities against Dalits have increased and nothing worthy of acknowledgement has been initiated by way of alternative vocational education for the safai karamcharis. Wilson’s greatest role has been to draw attention persistently to the horrors of their lives while fighting for redress through legislative measures.

In 2017 alone, more than 300 safai karamcharis died cleaning gutters. In the past two years, 500 lost their lives. An estimated one lakh head-loaders clean dry latrines in Bihar, Uttarakhand, MP, Maharashtra, Jharkhand and Rajasthan. According to the ongoing government survey, only 55,000 of the one lakh have been identified so far. In spite of all this, the budget for their rehabilitation budget has been halved from 10 crore to five crore in 2018-19.

The change in Wilson’s life happened as a logical extension of B.R. Ambedkar’s famous call to end oppression: “Educate, Agitate, Organise”. These were words of revelation for young Wilson.  He was born to Rachel and Jacob, the youngest in a family of manual scavengers, in the Kolar Goldfields township. His mother had a single ambition for him—to educate him so that he would have a life of dignity and a different vocation. But it was not so simple. When Wilson went armed with a higher secondary school certificate to the employment exchange, he continued to be (unofficially) classified as a scavenger on the basis of his address and caste. He was offered only scavenging and cleaning jobs. But Wilson continued to educate himself and graduated in political science from Dr B.R. Ambedkar Open University, Hyderabad. 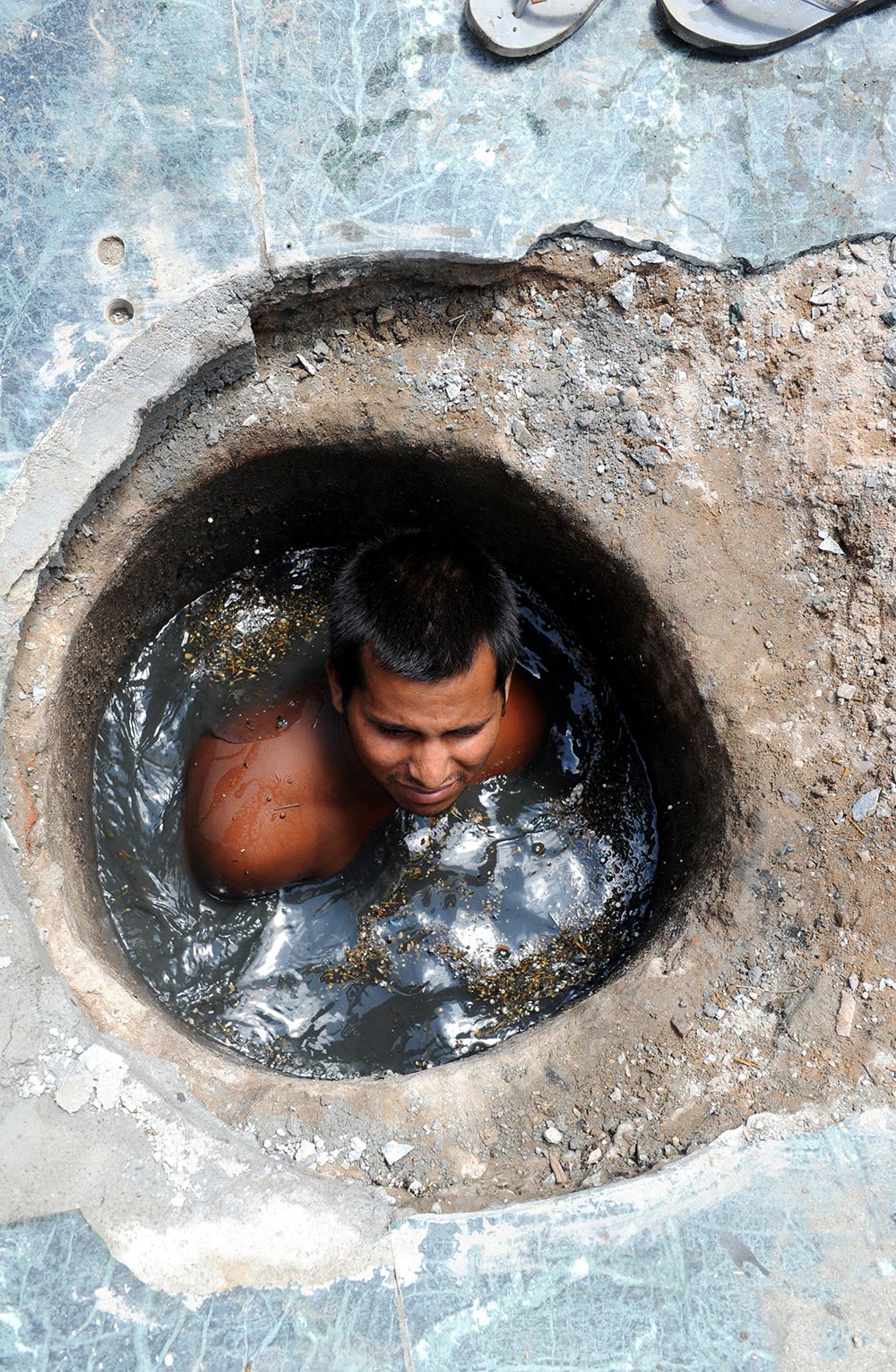 A worker ­submerged in a manhole

Agitation, the second stage of the gospel, began when Wilson organised a protest against this damning practice. He had already sent a complaint about dry latrines to the authorities of Kolar in 1986, which was typically ignored. With his newfound knowledge of rights, he decided to write to the Prime Minister, threatening legal action if the problem was not addressed. The initial victories came when the town’s dry latrines were converted into water-seal latrines and the scavengers were transferred to non-scavenging jobs. He began working with Paul Diwakar, a leading Dalit activist. He explains how Ambedkar’s brilliant analysis of their condition and charting a process of liberation gave him a sense of elation and belonging. He also met S.R. Sankaran, an icon for many ethical bureaucrats who had readily agreed to work with the manual scavenging community for its liberation from this shameful practice.

In organising and launching the Safai Karmachari Andolan, the twin issues of liberation from scavenging and an alternative vocation became the crux of Wilson’s concerns. In 1993, he initiated the filing of a public interest litigation (PIL) in Supreme Court, naming all states, Union territories and the government departments such as railways, defence, the judiciary, and education as violators of the 1993 Prohibition Act.

The Indian administration has been in continual denial, reporting that there were no dry latrines and ignoring the existence of manual scavenging. Then came a breakthrough in 2001, when the then Andhra Pradesh government agreed to a total survey of the state to identify manual scavengers and dry latrines. The SKA vigorously conducted district-level meetings and trained local leaders and volunteers for the movement. This was a beginning of visibility, liberation and rehabilitation. Wilson and the SKA organised a systematic campaign and volunteers photographed and documented each manual scavenger and dry latrine in the state. In 2004-2005, it undertook a mass latrine demolition drive across the state of Andhra Pradesh.

In October 2010, the National Advisory Council (NAC) wrote to the prime minister’s office declaring manual scavenging a national shame and asked to address its abolition with the utmost urgency and priority hoping to see the end of manual scavenging by 2012. Task forces were formed by the government for a new survey of the entire country in order to facilitate rehabilitation and look into amendment of the law to make it stricter along with bringing about the demolition of dry latrines. In 2013, SKA successfully lobbied for a new law that includes rehabilitation support for scavengers. It is now involved in crafting a new law that provides financial aid for scavengers transitioning to new occupations.

SKA has grown into a network of 7,000 members in 500 districts across the country. Its efforts have led to the liberation of 3,00,000 of the estimated 6,00,000 scavengers in India. In 2010, SKA led an India-wide march for the total eradication of manual scavenging. In 2015, activists undertook a 125-day bus journey across 30 states to mobilise the public against manual scavenging. The movement has since made significant progress.

Wilson received the Ramon Magsaysay Award in 2016. But the dogged det­er­m­i­n­a­t­i­o­n with which he has taken up the fight to provide dignity to an ignored people goes beyond recognitions, into the realm of true social and political struggle.

Aruna Roy is a social activist and a Magsaysay Award winner