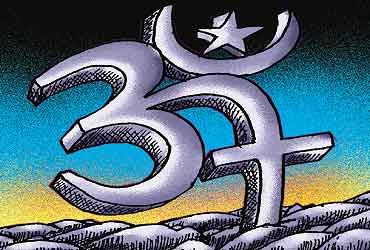 outlookindia.com
-0001-11-30T00:00:00+0553
"The country with the most impressive and intelligent secularist movement is India," wrote Christopher Hitchens in the respected journal, Daedalus, last summer. Hitchens is a public intellectual who is read and listened to with some admiration on both sides of the Atlantic. He did not explain, but I think what he meant is that Indian secularism has acquired many voices and it seems to be maturing.

It's sobering to remember, however, that Indian secularism was unable to stop the murderous carnage in Gujarat, which may have receded in public memory by the good cheer from a rapidly growing economy and an approaching election, but still remains a blot. There's a change, nevertheless, in the rhetoric of the political class. Amid the usual scramble for seats and alliances, there's healthy silence on religion. The turning point seems to have been the four state elections in November and December, and every politician who has been interviewed in the past eight weeks has talked about "bijli, sadak, pani". Our fondest hope, of course, is that these three words will replace "Mandir, Masjid, and Mandal" from our political lexicon and that, when it happens, may be the most dramatic change in the Indian political mindset in decades.

It is important to ask why Indian secularism has failed to stem the rising tide of intolerance in recent years? And the reason, I suspect, is that it's identified in the public mind with atheism. It's true that many of our most vocal secularists were Marxists and they didn't value the religious life. In a well-meaning effort to limit religion to the private life, they behaved as though all religious people were superstitious and stupid. This naturally didn't go well with the majority of Indians who are deeply religious and suspicious of godless westernised, brown sahibs telling them what to do. Our secularists were also statist, thinking that the state could reform society and religion, which is again arrogant and foolish, for, genuine reform must emerge from within the society. Moreover, our secularists forgot that the truly religious are usually deeply secular. Thus, what has failed is not the noble philosophy of secularism but its practice in India.

Partially as a reaction to this failure, a new generation of secularists has come to prominence in the past 15 years. The change began when Ashis Nandy first assaulted the old, orthodox, Nehruvian secularists with his critique of the European modernity in the mid-1980s. He promoted a return to tradition, wherein we might find the roots of a religious tolerance of a different kind, which might better resonate with the masses than the hegemonic language of western secularism. A year later, sociologist T.N. Madan wrote that secularism was having a problem in India because the realms of the sacred and secular continued to be deeply intertwined in Indian tradition. He added that we should "take both religion and secularism seriously, and not reject the former as superstition and the latter as a mask for communalism and or more expediency".

This attack did not go down well with the Nehruvian secularists, who roundly chastised Nandy and Madan for feeding the Hindu nationalists. In the early '90s, eminent social scientist Partha Chatterjee argued that the Hindu right was perfectly comfortable with the institutional processes of the modern state, and the main issue was not ideology, he felt, but to protect the cultural rights of the minorities, and this could best be done through toleration "premised on autonomy and respect for persons".

JNU political scientist Neera Chandoke responded by arguing that the concept of toleration was not enough and that minorities needed supportive structures in order to protect their cultural identity. Writer Mukul Kesavan and others rightly worry, however, that this sort of thinking will only delay the day when we might call ourselves equal and common citizens of one state.Rajeev Bhargava, the editor of an excellent volume of essays on Indian secularism, distinguishes between political and ethical secularism, and says that to exist in a more liveable polity, we as citizens need to agree to what is right rather than what is good. Let's just be content with living together, rather than living together well.

So, how do we begin to privatise religion? The answer, I think, lies with the deeply religious but moderate voices in each religion's mainstream, who must come forward and proclaim once again that true religion has nothing to do with political life. The failure of our contemporary public life is that we do not hear these voices, but only hear the shrill voices of extremists at both ends. It was not always so. Earlier, we had sensible public figures who were also deeply religious. Mahatma Gandhi, Maulana Abul Kalam Azad, Swami Vivekananda used to speak with credibility on behalf of the vast majority of religiously minded Indians. Today, what we have is an unfortunate polarisation between an influential and articulate minority of secularists and the vast majority of silent, religiously minded Indians. Neither takes the trouble to understand the other.

Following Bhargava, our secularists should learn from American philosopher John Rawls and distinguish between public reason and secular reason. While public reason limits itself to political and civic principles, secular reason is broader and deals with a secular person's moral doctrines and first philosophy. Our secularists need to be aware of this distinction and refrain from introducing secular reason into political debate. This is not easy to do, I realise, because liberal political values are intrinsically moral values and closely intertwined with moral doctrines.

For the record: This column could not be carried in the print edition of the magazine, and will appear in a subsequent edition.