Beyond Ayes And Nays

Predictable points of view take us nowhere. The courage to compromise just might make a difference. I look forward to the day when Kashmir is peaceful and prosperous, if only because journalism would be easier. 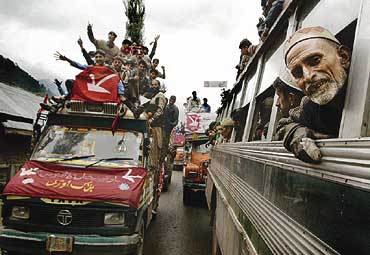 outlookindia.com
-0001-11-30T00:00:00+05:53
So it's official. The first phase of the Kashmir elections has been a success. Nearly half of the electorate voted. Militants tried and failed to scare people off. There was no coercion as in 1996. The Americans have given their approval. No. Wait. It was a farce, a sham. People were forced to vote. Turnout was much lower. No assembly election will ever solve Kashmir's problems. And so it goes.

Those of us who have wandered the political bylanes of South Asia for some time always feel a shudder of dread when we hear the K word. That's because covering Kashmir is a challenge for any journalist who believes in objectivity. Few places in the world are so riddled with factionalism, so polarised by history and politics, so gripped by tragedy. Yet, reporters are supposed to get "the story"; the sequence of events that explains everything; the context that makes the intelligent lay reader nod his notional head as enlightenment flows from our copy.

This past week's election was a prime example of the Kashmir canon, a day of polling that brought more confusion, more polarisation. For the umpteenth time in the past decade, I bounced along the rutted roads of the Valley, racing from place to place, hoping that the speed and scope of my journey would conjure up insight. In Pattan, the closest place to Srinagar going to the polls, enthusiastic voters crowded a polling station. The security forces manned machine gun nests and imperiously waved on journalists' vehicles. We ignored them and stopped to investigate, the full force of the Election Commission behind us. One crpf jawan took this personally, and shoved my colleague, a petite lady who barely reaches 5 feet 2 inches in high heels. That day she wore her trainers.

We wondered if he was hiding something. Sure enough, voter after voter told us they'd been coerced, forced out of their home by "soldiers" and made to stand in line at the polling station. Yet they told us this with big smiles on their faces, and the words sounded oddly rehearsed, a pat recital from a preordained script. I had my doubts. Over to Sangrama, just down the road. There, no one was being forced to vote. Indeed, no one was voting. By 11 am, at the government school just before the turn-off to Sopore, election officials sat at their posts, wearing bullet-proof jackets. One confided that he didn't expect anyone to come out, and by the end of the day, he was more or less right. Another bouncing, bumpy Ambassador ride to Handwara town. On the way, I pondered what I'd seen. Years of covering Kashmir have taught me to avoid quick generalisations. Sure enough, approaching the outskirts of Handwara, we could hear the voting before we saw it. The mood was ebullient. If there was anger, it was because voting was going too slowly.

Farooq Rasool, a thoughtful 18-year old, explained why he was voting for the first time, despite militant death threats. "Doobte ko tinke ka sahara." He told us, a drowning man can cling to even an inch of moss. Colleagues went to Kupwara, dangerously close to both the LoC and Lolab, where Mushtaq Ahmed Lone campaigned before he was gunned down by militants days earlier. They found more queues of voters, more enthusiasm.

As they filmed people speaking eloquently about democracy and war-weariness, another camera crew in Sopore was in the midst of an anti-election riot. They were lucky to escape with their equipment, and their persons, intact.

At the end of the day, we all trooped dutifully off to hear what had happened, from the various conflicting points of view across the Kashmiri spectrum. "A joke, a hollow exercise," according to Abdul Ghani Bhat of the All Parties Hurriyat Conference, a man that India will certainly be doing business with at some point soon, whatever it says about him now.

"History in the making," said Pramod Jain of the Election Commission, a sincere and dedicated official.Predictably, Pakistan backed the aphc. The Indian government, and most of the media, echoed Jain's assessment. But the faultline in Kashmir is littered with human lives, as well as statistics and semantics. A polarised polity means that no one has yet found the right answers, not that good and evil are jostling for position. Elections? Yes, why not. Democracy is a grand thing. But what happens after the vote is more important than how many voted. How Kashmir develops is what matters, not what the foreign media think.

Predictable points of view take us nowhere. The courage to compromise just might make a difference. I look forward to the day when Kashmir is peaceful and prosperous, if only because journalism would be easier.

(BBC's Daniel Lak was in Kashmir to cover the election.)