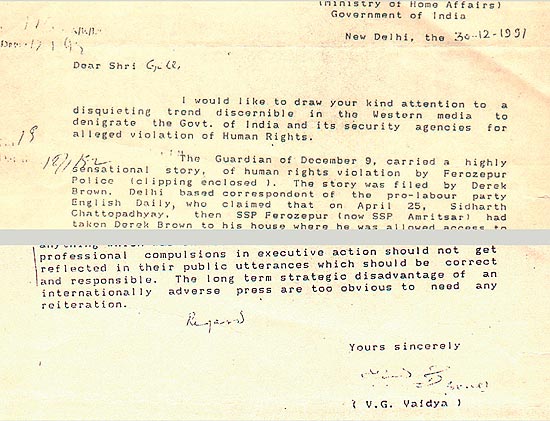 On December 30, 1991, V.G. Vaidya, special director, Intelligence Bureau, sent a “sec­ret” communication to then DGP K.P.S. Gill in which he referred to fake and simulated encounters. He said that district-level police off­icers should be extremely discreet and circumspect in dealing with the western media. “They sho­uld refrain from even implicitly (sic!) hinting that they indulge, connive or app­rove of anything which was in violation of the law of the land. Their professional compulsions in executive actions should not get reflected in their public utt­erances which should be correct and res­ponsible.” The letter was in the context of district police chiefs parading before a London Guardian correspondent some militants in custody who were later shown kil­led in a police chase—which naturally made the paper draw the inference that they had been done away in  fake encount­ers. In an interview in Sep­­t­ember, K.P.S. Gill denied having ever received such a letter. When Outlook rem­inded him of its details, he brushed it aside saying, “IB had no role in anti-terrorist work and has tried to run down the efforts of the Punjab police”.