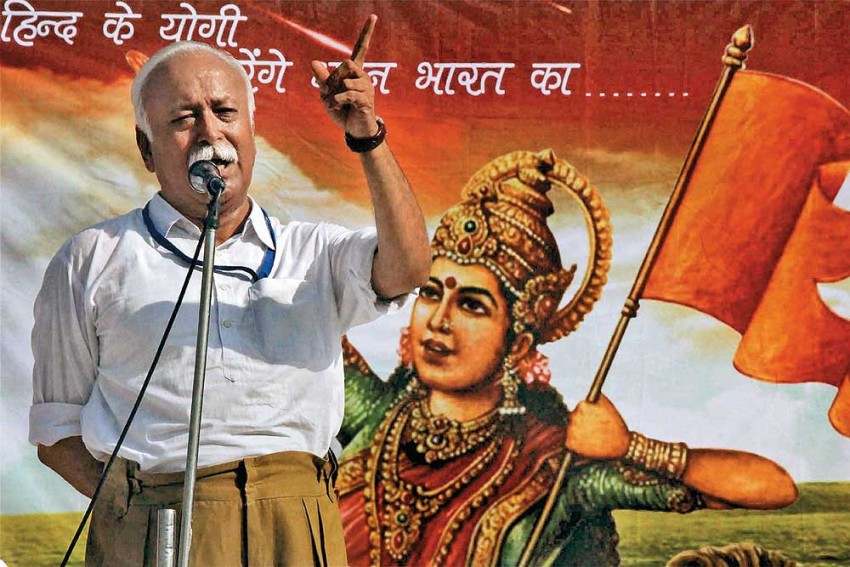 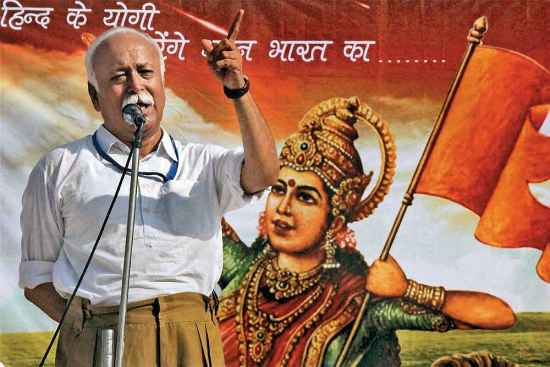 Namaskar. After carefully pondering over your call for all Indians to be regarded as Hindus, I’m delighted to inform you that I’ve decided to become a Hindu. The first ‘Hindu Muslim’ in secular India! Or should it be a ‘Muslim Hindu’, sir? Kindly guide me because these days yours is the last word. That Modi fellow you’ve installed as prime minister is more bark than bite. You’re the real deal!

How clever you’re at oversimplifying complex concepts such as cultural nationalism, and what a way you’ve with words and their meaning. Wasn’t it Humpty Dumpty who, shortly before his big fall, boasted that words meant what he intended them to mean, “no more, no less”? Pardon me, sir, I’m not suggesting for a moment that your fall is imminent. Banish the thought. Damn me!

But, Bhagwatji, before you start tru­mpeting my decision as a “vict­ory” for the RSS, I wish to disabuse you of any notion that I’m submitting to its diktat. Far from it. Actu­a­lly, I’m trying to call its bluff. And here’s why. You know as well as I do that the RSS is running a phoney cultural war aimed at keeping the minorities, especially Muslims, in a constant state of terror. The more we squeal, protest and plead in the name of secularism and cultural div­ersity, the more emboldened it gets. But what if we stop squealing, protesting and pleading? And, inst­ead, start pretending to play ball?

With Muslims now inside the 'Hindu tent', whither project Muslim bashing? it's almost 'mission done' for the RSS.

For decades, the issue of Muslim identity has provided a fertile ground for the RSS to bash them. But, sir, Muslims have now become smart, don’t be surprised if they call your bluff—get your lot off their back so that they can then get on with their lives? If I were in your position, heading an organisation whose ideological raison d’etre rests on provoking Muslims and then feeding on their fear and anger, I would be a worried man. Because with Muslims now inside the ‘Hindu tent’, whither project Muslim bashing? In a sense, it’s almost “mission accomplished” for the RSS. The enemy tamed and ‘Hindufied’. Time to shut shop and go home.

I know, I know , Bhagwatji, what you’re going to say: that the RSS is continuously engaged in devising new and creative ideas to deal with these cocky Muslims (sorry, Babur ki aulad) and, rest assured, it will soon come up with something else (perhaps even more inflammatory) to keep the pot boiling. You might remind me what pseudo-secularists said when back in 1992 your axe-wielding footsoldiers took the law into their own hands and—giving two hoots to constitutional niceties—demolished the Babri Masjid. They said you had shot yourself in the foot by destroying the mosque because the threat of doing something horrible is always more potent than actually carrying it out. But a decade later you’re still here—stronger, more menacing and, effectively, in power.

Agreed. But I’m sure you’ll agree that with the masjid gone, the Ram temple issue doesn’t have the same old emotive ring for Muslims anymore. In fact, today, not many really care what you do with the left-over “dhaancha”, and it will not be easy to provoke them on this issue again. Bhagwatji, perhaps the Sangh parivar has not noticed. But, finally, Muslims have caught on to the playground bully’s tactics: the more easily you give in to provocation, the more they’ll bully you. So Muslims have learned not to rise to the bait. If you’ve followed their reaction closely, you may have noticed that they have not reacted to your latest move in the way you might have expected. In comparison, the secular Hindu reaction has been sharper.

What I’m trying to impress upon you is that while Muslims have bec­ome street-smarter, so to speak, and picked up new survival tricks, the RSS remains stuck in a time warp. By overplaying its majoritarian card, its bite has lost its sting. In reality, it never had more than nuisance value, but even that is seeping away, with Muslims, wiser by experience, choosing to ignore it. Cru­cially, Muslims have lost their old fear of the RSS as the new generation has a more realistic sense of their place in India and sees such groups as something that comes with the territory when you are in a minority. The Muslim Right, which fed the RSS, has also considerably weakened, leaving less room for it to dress up its attacks as Hindu reaction to Muslim provocations. Watch out, Bhagwatji, the RSS is losing its clout as the Hindu Right’s chief agent provocateur. And before you issue your next edict, kindly remember that Islamophobia doesn’t have the same purchase these days; and if you’re not careful, you may soon find yourself out of business. But, for now, Jai Hindu!