Between The Degrees That Divide

Children of gardeners, drivers or domestic help can now contemplate a career of their choice 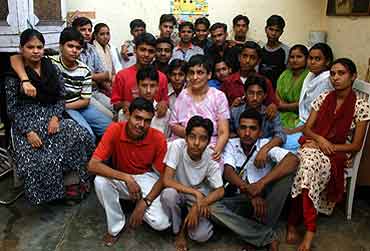 outlookindia.com
-0001-11-30T00:00:00+0553
It’s 6 pm and flat number 13 in New Delhi’s posh and busy Khan Market area seems elusive. Finally I locate it in the middle circle that shoppers usually bypass. A signboard reads ‘Manzil’. Now for the story that will warm your heart.

Flat 13, home to the Gulati family that runs Manzil, is a hive of activity. It is an informal school for children of domestic servants, drivers, peons, gardeners and others involved in the upkeep of the neighbourhood’s posh homes and offices. The school is not meant to be a substitute to formal education but a supplement to it.

Of the 80 students who currently attend Manzil, most go to regular government schools. Some of the older students come to Manzil to polish their spoken English and computer skills while simultaneously pursuing college degrees through correspondence.

The Gulatis’ living room is littered with the students’ art and craft work. Another room has been converted into a classroom. A timetable pasted at the entrance lists four kinds of classes—maths, English (and Hindi), computers and creative classes including painting and theatre. The emphasis at Manzil is on developing children’s earning skills rather than helping them in securing academic degrees. Guest lecturers from various fields often visit the school to talk to the students about their professions.

Classes begin at 3 pm and end at 10 pm, six days a week. All classes are free, but there is a fine of Rs 5 for latecomers and Rs 10 for absentees. Most of the teachers work on a voluntary basis or for a small salary. Funds are tough to come by—Manzil runs purely on the Gulatis’ determination and goodwill of friends.

Many of the older children therefore perform dual roles as students and teachers. The idea is to make Manzil a self-sustaining unit where college-goers and graduates who have the adequate competencies can do their bit by teaching newcomers. Ashish Kumar Tiwari, the 20-year-old coordinator of Manzil, is one such beneficiary of the system. The son of a driver, Ashish came to Manzil in the ninth class to learn how to use a computer. Five years on, not only is he adept at it but is also fluent in English. "When I came here, I was shy, had no friends. I have developed my confidence and my skills here," he says.

Ashish introduces me to Sonia Gulati, 40, who suffers from multiple disabilities. She is, however, able to take occasional English and Hindi classes for students. When I ask her about Manzil, she says: "I’m the reason why all this started and why it is still running." In 1984, when Sonia’s mother Indira Gulati wanted to enrol her daughter in a regular school, she met with stiff resistance from public schools. Finally, she decided to start her own school for handicapped children out of one room in Delhi’s Kotla area. It was later extended to provide free education to all children in the locality. Indira, who is still active at 69, now takes daily sewing classes for women at the school.

Manzil started eight years ago as an informal tuition centre when Indira’s son Ravi, an iim graduate, took it upon himself to teach maths to neighbourhood kids from low-income families. "Ravi realised that these kids were being forced to learn maths by rote in school. So he decided to teach it logically," explains 22-year-old Pankaj Sulodia, another product of Manzil. For Pankaj, who has worked with a real estate firm and been to the UK on a youth exchange programme, Manzil has been the bridge connecting aspirations to reality. Though his parents were shocked when he gave up his Rs 9,000-a-month corporate job to work for Manzil, Pankaj enjoys looking after the school’s daily activities. His plans for the school?