Between Temples And Night Clubs

Thirteen years on, his wait for justice continues. Will the gods answer his prayers this time? 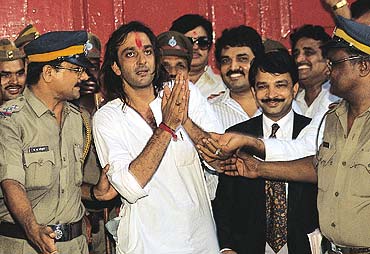 outlookindia.com
-0001-11-30T00:00:00+0553
Days after Sanjay Dutt cancelled all work and held his breath to wait for a judgement in the 1993 bomb blasts case, he walked into a suburban Bombay nightclub. First he spoke some from the DJ's console and then played Metallica's Nothing Else Matters, followed by an apt Comfortably Numb by Pink Floyd.

That's about as much as is known about how Bollywood's edgiest star is dealing with the approaching climax of a 13-year saga that will close with a judgement in the '93 bomb blast case. After the emotional nightclub appearance, he has hunkered down to wait silently for the verdict, postponing shooting on the nearly half-dozen films he has on hand. He did not promote his now cult hit movie, Lage Raho Munnabhai and cancelled a July birthday celebration, choosing to visit temples instead.

"He is worried like any normal person would be. This case is like a sword hanging over him for the last 13 years," says Dutt's lawyer Satish Maneshinde. Professionally, it is a period book-ended by Khalnayak on the one hand and the hugely successful Munnabhai series on the other, an indication of how his public image has softened around the edges overtime. But whether the onscreen transformation leads to one off screen will only be known in a few weeks when a verdict is given on Accused No. 117. The charges against Dutt include criminal conspiracy and possession of illegal arms under IPC and the Arms Act; and under TADA they include abetment of terror and possession of unauthorised arms.

Police allege that Abu Salem and his men gave Dutt weapons, which may have been used in the blasts, to hand over to another accused, and that he kept an AK-56 from this cache for himself. Later, with the cops on his trail, Dutt allegedly asked associates to burn the weapon, remnants of which have been produced. Dutt did, at one point, admit to keeping that gun for his protection, but later withdrew that confession statement.

With the verdict within touching distance, no one is willing to speculate on the chances of Dutt getting convicted. If he is convicted under the IPC or the Arms Act, he could get away with a lighter sentence but if he gets convicted under the now repealed TADA, or Terrorist and Disruptive Activities (Prevention) Act, the minimum sentence is five years. Dutt has already spent 18 months in jail, from 1993 to 1995.

In the last few months, he has been to Shirdi and Vaishno Devi, as he did when he got out on bail in 1995; he also asked for court permission to visit Pune's famous Dagdu Sheth Ganpati temple, but then withdrew the request because the trial was already under way. Days before the judgement was initially supposed to start, in August, he went to the Siddhivinayak Temple along with sister Priya, just as he did in 1995 when he went there straight from the Arthur Road jail.

With the unprecedented success of his new film, a beautiful girlfriend and a supportive family waiting for him, Dutt can only hope that the long-awaited verdict will finally deliver him from a bad dream.