The clamour rises for under-probe K.G. Balakrishnan to quit NHRC 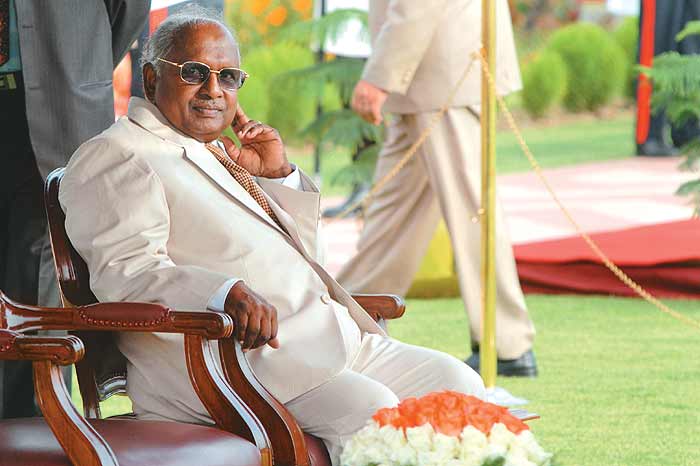 The last thing that a government busy dousing its own fires wants is another blaze. With the UPA, however, you never know. First its nomination of P.J. Thomas as the chief vigilance commissioner had to be noisily rescinded. Now, the appointment of former chief justice of India, K.G. Balakrishnan, as the head of the National Human Rights Commission (NHRC) has run into a thick fog of uncertainty.

It was on June 22 that the Union home ministry wrote to revenue secretary Sunil Mitra to institute an inquiry against Balakrishnan. Mitra, in turn, directed the Central Board of Direct Taxes (CBDT) to probe allegations that the income and assets of the judge as well as his kin showed a sudden increase during his tenure as CJI from January 2007 to May 2010. The inquiry was ordered following media reports and 15 complaints, including a PIL, filed in the Supreme Ccourt.

“I’d have stepped down. I can’t say what can be done constitutionally but the government can surely step in.”
Julio Ribeiro, Chairman, AGNI

The CBDT investigation has put a big question mark over Balakrishnan continuing as NHRC chairman. In legal as well as political circles, the view is that he should quit to at least save the credibility of an important organisation which addresses key rights issues. Says Rajindar Sachar, former chief justice of the Delhi High Court, “He should not continue. In government service, even if there is an enquiry against a deputy secretary, then he is suspended till the probe is completed. In Justice Balakrishnan’s case, in such a high office, there is no question of suspension, but to maintain the dignity of the post he should stop working till the probe is over.” Adds former judge of the Bombay High Court, Hosbet Suresh, “He should resign on his own to maintain the sanctity of such a high position.”

While allegations against Balakrishnan and his kin have been making news for almost a year now, things took a serious turn on February 19 this year when advocate Manoharlal Sharma filed a PIL before the apex court demanding a judicial probe into the income and assets of the judge and his kin. Sharma estimated that the various properties of Balakrishnan’s immediate family alone accounted for Rs 15 crore. Supreme Court chief justice S.H. Kapadia admitted not just this petition but also took cognisance of a complaint by Delhi-based doctor and activist Mohammed Furqaan, who alleged that a corporate family dispute between two brothers which the judge adjudicated on was influenced by a contact in Dubai.

Sharma’s petition, submitted to the home ministry, listed Balakrishnan and family’s income and properties and also attached documents showing the purchase of some of the properties. If the allegations against Balakrishnan are found to be true, the home ministry may move President Pratibha Patil seeking sanction to prosecute him and also remove him from the post of NHRC chairman.

“Justice Balakrishnan should resign on his own to maintain the sanctity of such a high position.”
Hosbet Suresh, Former Bombay HC judge

Currently, the investigation is with the revenue and I-T departments. The 15 complaints against Balakrishnan have been filed from across the country. All these have alleged that his relatives amassed wealth disproportionate to their income during his CJI tenure. There is already an ongoing probe against his relatives in Kochi by the tax authorities, which has revealed that several properties have been undervalued.

Criticism of Balakrishnan is coming from several quarters. Senior lawyer Kamini Jaiswal notes, “K.G. Balakrishnan’s tenure was one of the worst the Supreme Court has had. Every action of his court was under a cloud of suspicion. Things were such that as soon as he left, the atmosphere in the court was like what Delhi felt on the introduction of CNG.” Former Supreme Court judge, Justice V.R. Krishna Iyer, who has written a letter to the prime minister demanding that Balakrishnan quit from the NHRC, reiterated his position to Outlook: “He should resign. I have written that in my letter to the prime minister. I am repeating my point again.”

Reacting to Balakrishnan continuing as NHRC chairman, BJP’s Ravi Shankar Prasad laments: “People of the country look up with hope to those who have occupied or are occupying higher positions in the judiciary. So, it is their duty to ensure that their conduct should not let down the people of the country. Institutional trust is of utmost importance, be it the judiciary or NHRC—both are of equal importance. In such a situation, I would like to leave it to Justice Balakrishnan to decide whether he should continue in his office or demit. It is completely his call, he has been with the judiciary for long and understands the value of the faith of people in the system.” The CPI strongly believes the government should take a stand. “With so many complaints and a pending inquiry against Justice Balakrishnan, he should not be the chairman of NHRC. The NHRC is about the faith of the people.”

“Things were such that as soon as he left, the court atmosphere felt like Delhi did after the introduction of CNG.”
Kamini Jaiswal, Senior lawyer

It is not only the political class and legal experts who are reacting. Julio F. Ribeiro, former Mumbai top cop and chairperson of anti-corruption body AGNI or Association for Good Networking in India, said if he was in the judge’s shoes and had an ongoing investigation against him, he would have not held any position in the government. “I would certainly have stepped down. I am not sure what can be done constitutionally but I am sure the government can step in. Justice J.S. Verma recently said something in this regard, maybe the government can refer to that,” Ribeiro told Outlook. Former RTI activist and present chief information commissioner Shailesh Gandhi is a bit more cautious. “I don’t know how serious the charges against K.G. Balakrishnan are,” he says. “If they are reasonably serious and there’s definitive evidence, he should step down. The government has to investigate and decide one way or the other, and this process should not take long, otherwise it allows a dishonest person to continue in office. But we have to be careful because hundreds of people also levelled charges against Prashant Bhushan and Anna Hazare.”

But the broad consensus is that the investigations should be speeded up so that the truth can be made public. Meanwhile, everyone is agreed that it will be in national interest for Justice Balakrishnan to at least take a break from the NHRC. At least till such time that the probe against him clears his name.